Group protests the involvement of uniformed gardaí and corporations in march

The Pride flag is hoisted outside Leinster House as thousands prepare to take to the streets of Dublin for the annual Pride Parade, celebrating the LGBT+ community. Video: Alan Betson 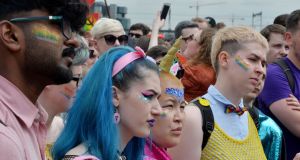 About 150 people gathered on Rosie Hackett Bridge in Dublin on Saturday to take part in an “alternative Pride”, protesting against the corporatisation of the main Pride event as well as the participation of uniformed gardaí in the parade.

Representatives of all Government departments, the Garda, the PSNI, the Defence Forces, Central Bank, Revenue and many other agencies of the State took part in the main Dublin Pride parade in the city centre.

A spokesman for Queer Action Ireland, who organised the protest event, said the group “could no longer in good conscience march” when it emerged gardaí were to take part in uniform.

“The gardaí have a longstanding tradition of enforcing unjust laws on the LGBT community,” he said. “So we made the decision to withdraw from the parade and set up what we feel is a space for an alternative Pride that can recapture the spirit of Pride.”

Speaking later, Garda Commissioner Drew Harris said he could “understand” why some members of the LGBT community were not happy with the force’s involvement, but insisted the Garda was there “with good intent”.

The spokesman for Queer Action Ireland was also critical of big businesses getting involved, and accused them of exploiting the popularity of the event. “There are more than 100 corporations taking part this year,” he said.

“We feel that it is taking the attention away from the spirit of Pride and the issues that need attention. Obviously it’s amazing that society has changed, but what we want to do is celebrate the people who have brought that change about.”

Aoife O’Riordan (36), from Cork, who was attending the protest, said there were “a lot of people who would find it very difficult to feel safe at a Pride when both the Garda and the PSNI are marching in uniform”.

However, Ms O’Riordan said she was pleased the LGBT+ community felt comfortable enough to engage in public disagreements.

“I think, since forever, there have always been people in our community who have really diverse views, because we’re a diverse community, but felt they had to put a certain face forward,” she said.

“I think it’s wonderful that we have gotten to a stage where we feel confident enough and safe enough that we can actually have disagreements out in the open without feeling that we all have to row in behind the flag.

“Dublin Pride is huge now, and that’s amazing and beautiful. It also means there is space now for dissent, and space for us to have those complicated conversations about it in ways that I don’t think we were able to do before.”

A woman who did not wish to be named said she would not have an issue with companies taking part in Pride if their motivations for doing so were right.

“I personally work at a pretty big company that has a presence at Pride,” she said. “I think it’s great that they’re there, but there has to be that balance. I don’t have anything against companies showing solidarity, but it has to not be about them.”

Mallaidh from Dublin said Pride was “about protest” and that the presence of Government Ministers “who have been dragging their feet for more than a decade on LGBT rights and healthcare” was “just pink washing”.

The crowd were reminded of how far the LGBT movement has come by veteran activist Izzy Kamikaze, who recalled marching after the death of Declan Flynn (31), who was beaten to death by a gang of five teenagers in Fairview Park in 1982.

“I was privileged to be one of the people who marched through the streets of Dublin after Declan Flynn’s murderer was freed by a court,” Kamikaze said. “We marched to Fairview Park.

“I was 20 years old. It was one of the most important things I ever did. One of the things that really upsets me is when people refer to this as the first Pride, because Pride is something else.

“We were scared that day. We were mourning the loss of an individual, but also how little value our lives had, and what little value the country we lived in attached to our lives.

“I t was anything but a Pride parade. It was cold, and I remember the upturned collars, the scarves pulled up over the noses, and the hats pulled down over the eyes.”