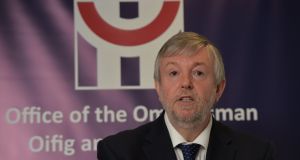 A doctor discussing another person’s medical history with a patient and a local authority censuring a tenant over a tweet were among the cases the ombudsman intervened in last year.

Peter Tyndall’s office, which examines complaints about public services and authorities, received its highest number of complaints in a decade, according to its annual report, published on Wednesday.

There were 3,664 complaints to the office last year, up 9 per cent on 2018 (3,364) and the highest number since 2010. Increases were largely driven by complaints about housing and local authorities (up 12.6 per cent on 2018) and the education sector – including grant-awarding bodies – which were up 17 per cent.

There were 708 complaints about the health and social care sectors, including 261 about hospitals.

In a case involving Letterkenny General Hospital, “Deirdre” complained after a doctor, while speaking to the patient about her medical history, discussed that of someone else.

“She then discovered a letter on her file belonging to a different patient but with the same name as hers ... Deirdre complained to the hospital but was unhappy with how it responded.”

The ombudsman discovered the doctor had read from another patient’s record, which was misfiled on Deirdre’s medical chart.

Following the ombudsman’s investigation, the hospital apologised to Deirdre. It committed to delivering refresher training on the correct filing of documents in medical records and reviewing its policies on the management of medical records.

Mr Tyndall received 990 complaints about local authorities. More than half (546) were about housing allocations and repairs.

In a case involving Cork County Council, “Conor” complained the council had breached his tenancy agreement. “The council said Conor had used abusive and insulting language in a tweet he had sent about a court case involving the owner of a neighbouring property, and that he had published a photo of the owner, without her consent, on his blog,” according to the annual report.

“Conor said that the tweet was factual, and that he did not publish the photo.”

The ombudsman found the allegations concerning the tweet and the blog had not been put to “Conor” to allow him to respond, and the tweet itself contained information already in the public domain. “In addition, the council did not have a social media policy for its tenants.” The council removed its allegations from Conor’s tenancy file.

There were 65 complaints about private nursing homes, including about overcharging and security of tenure. Mr Tyndall said in a number of cases, “providers have threatened to terminate a resident’s contract due to the actions or behaviours of family members. The residents’ own behaviour was not a problem”. “I am of the view that the resident should not be adversely affected by the actions of their relatives,” he said.

Mr Tyndall highlights the “particular injustice” on the continued failure of government to legislate for a new scheme to replace the Mobility Allowance and Motorised Transport Grant Schemes. These schemes, which fund adapted cars or taxis for some people with disabilities, have been closed to new entrants since 2013 .

“Despite numerous promises to introduce new legislation, there has been no evidence of any progress on the matter.” Urgent action was needed “to remedy this particular injustice”, he said.

The number of complaints from or on behalf of people in direct provision increased to 168 last year, up from 152 in 2018. Most were about accommodation providers.