Females more likely to be ‘extremely concerned’ about health than men, study finds 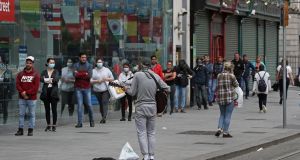 Women’s well-being has been significantly more harshly affected by the coronavirus crisis than men’s, though men are suffering too, according to a report from the Central Statistics Office.

Published on Tuesday it finds women are more likely to be “extremely concerned” about their and someone else’s health, more nervous about the future, significantly less satisfied with personal relationships and more likely to be smoking more and eating more junk food, than men.

The CSO’s Social Impact of Covid-19 survey April 2020, finds more than one in four women (27.6 per cent) are “extremely” concerned about somebody else’s health, compared to one in five men.

Women are also more likely to report being “extremely” concerned about their own health and maintaining social ties than male respondents.

Last month, three quarters of women said they felt “very nervous…at least a little of the time” in the past four weeks, compared with 61.3 per cent of men.

The proportion of both men and women feeling downhearted or depressed “at least a little of the time” in the past four weeks has doubled since 2018.

While two years ago, a third 33.2 per cent reported occasional low mood, last month the rate was 75.8 per cent. Among women, the rates were 40.7 per cent two years ago and 82.6 per cent in April.

Both women and men are feeling lonelier than in 2018, with a third of men reporting loneliness “at least a little of the time in the past four weeks” increasing to 51.4 per cent in April 2020. Among women the proportions were 41.2 per cent in 2018, rising to two thirds last month.

“The percentage of women ‘extremely’ concerned about maintaining social ties was double the male rate (10.9 per cent compared with 5.4 per cent).”

And while in 2018 rates of low life-satisfaction were similar among men and women, they are now significantly worse among women, with 36.7 per cent rating their overall satisfaction rate as “low” last month, compared with to 22.1 per cent of men.

Low satisfaction with personal relationships has also increased dramatically, from just over five per cent among men and four per cent of women in 2013 and 2018 to 14.3 per cent for men and 18.4 per cent for women this year.

Over a third of women smokers have increased their tobacco consumption since Covid-19 restrictions were put in place, compared with just over a quarter of men.

At the same time 54.3 per cent of women are “considerably more likely” to have increased their consumption of junk food and sweets, comparted to 35.6 per cent of men.

Of those working from home, in households with children, a third of women reported feeling very nervous “at least some of the time” compared to just under a quarter of men.

“Women are more likely to report Covid-19 related childcare issues than men (9 per cent compared with six per cent). More women (21 per cent) than men (15 per cent) are caring for a dependent family member or friend because of the crisis and a higher percentage of women are finding it more difficult to work from home with family around than men (11 per cent compared to nine per cent)

Perhaps unsurprisingly almost half of women would like to return to their place of work after Covid-19 restrictions have been lifted, compared to less than a third of men.