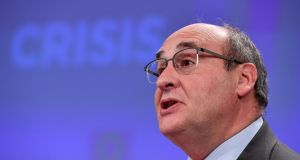 Multilateral co-operation is needed to ensure all countries are able to access the vaccine for Covid-19 , Antonio Vitorino the director general of the International Organisation for Migration (IOM) has said. Photograph: John Thys / AFP via Getty Images

Multilateral co-operation is needed among world leaders to ensure all countries, regardless of economic wealth, are able to access the vaccine for Covid-19 once it’s discovered, the director general of the International Organisation for Migration (IOM) has said.

“International scientists and medical doctors are cooperating to find a vaccine in a way that has never happened before,” said Mr Vitorino. “But it’s not just about cooperating in discovering the vaccine; it’s also making sure everyone is entitled to the vaccine.”

Worldwide vaccination can only be achieved through international cooperation and cannot be done solely on a national basis, he said. “Otherwise we will create one healthy world and another unhealthy world divided by economic power.”

Smaller countries, like Ireland, should be at the forefront in advocating for equal health treatment for all, he said. “We are all entitled to access a vaccine in the name of human dignity. Countries small in size can be very big if they use authoritative moral attitude.”

Speaking at an online event on the global response to Covid-19 organised by the Irish Institute of International and European Affairs, Mr Vitorino said it was “just a question of time” before the coronavirus becomes widespread in refugee camps across the globe.

He also expressed concern regarding the spread of the virus among displaced people travelling in large groups, including thousands of Venezuelans who have returned from Colombia because of the job losses during the pandemic.

Universal health coverage is the only way to protect migrants’ welfare while also stemming the flow of virus, he said. Citing the example of Singapore, which initially had a low number of Covid-19 cases but recently recorded thousands more among migrant workers, Mr Vitorino underlined the importance of health care for all.

“Universal access to health is the first key lesson to be taken from this major pandemic. If we do not allow access to migrants to testing and treatment, irrespective of their legal status, our entire community will be under threat.”

Mr Vitorino also highlighted the drop in remittance payments from migrants to their families since the outbreak of the virus, noting that the World Bank has forecast a 20 per cent reduction in global remittances because of Covid-19.

Mr Vitorino praised his home country of Portugal for fast-tracking the asylum process of thousands of asylum seekers during the crisis and noted that the Italian government had agreed to regularize 600,000 migrants needed to work in the agriculture industry. Other countries are taking steps to recognise the frontline work in healthcare, retail, transport and agriculture carried out by migrants during this crisis, he said.

Meanwhile, other countries continue to scapegoat migrants as “virus carriers”, said Mr Vitorino, adding that measures were needed to ensure wealthier countries did not block entry to people from poorer countries in a post-pandemic world.

“After 9/11 there were changes in security for travelling… Now the point is no longer what you carry; you have become the problem because you might be carrying the virus.

“Some countries are more capable of setting up border systems to assess the health conditions of travellers but others won’t have that possibility. We might create a system where access to mobility will be limited by economic conditions.

“We are at a crossroads – things can still evolve in a negative way for future mobility or things can evolve in a positive way if we have a fair, honest, reasonable conversation about how much we need mobility.”