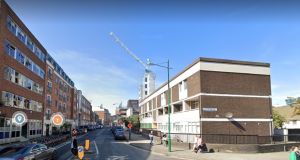 The O’Callaghan Hotel Group wants to acquire St Andrew’s Court, a block of 14 dilapidated flats for senior citizens at the corner of Fenian Street and Sandwith Street in Dublin 2. Image: Google Maps

A proposal to hand over a block of council flats in Dublin city centre to the owners of the Davenport and Alex hotels, in exchange for apartments due to be built by the hotel group, will be put to city councillors this week.

The O’Callaghan Hotel Group wants to acquire St Andrew’s Court, a block of 14 dilapidated flats for senior citizens at the corner of Fenian Street and Sandwith Street, close to two of its city-centre hotels.

In exchange, the company will transfer to the council ownership of 28 apartments and a ground-floor retail premises it plans to start building in the new year.

The company earlier this year secured planning permission for the apartment block at the corner of Sandwith Street and Boyne Street, less than 50m from St Andrew’s Court. It expects the development to be completed by August 2022.

The council said the completed scheme would be worth “more than double the market value of the St Andrew’s Court site, ie €12 million as against €5 million”.

It would “deliver the completed social housing development by August 2022 which would be far in advance of any new development by DCC on the St Andrew’s Court site at no cost to the State”.

The council has had several redevelopment plans for St Andrew’s Court in recent years. The site was most recently designated for a “rapid build” project of 42 apartments funded by the Department of Housing. These plans were at an advanced stage, with a design team due to be appointed by the end of this year, before the deal with the hotel group was put on the table.

“St Andrew’s Court has been in a deplorable condition, and it has been like that for years. The council has had various plans for it but nothing has been done.”

Other small sites in the city could benefit from similar schemes, he said. “I think this is a good template. It is value for money. It absolutely makes sense here and could work in other areas.”

However, Sinn Féin is opposed to the deal. The party’s local TD Chris Andrews and councillor Daniel Céitinn jointly said public land should be kept for public housing, and not be used for “unaffordable housing or hotels”.

The council should continue with the plans it already had, they said.

“The council undertook to build approximately 40 apartments on this site. This is at an advanced stage – a design team has been selected and [the council] is just waiting on approval from the Minister.”

They said residents who had moved out of St Andrew’s Court had been given “letters of comfort” that they could move back in once it was redeveloped.

They added St Andrew’s Court was substantially larger than the site owned by the hoteliers.

The hotel group has not responded to queries.