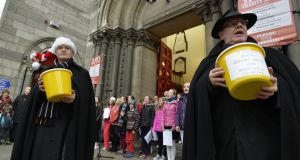 This year marks the 20th anniversary of the Black Santa Sit Out in Dublin which has raised more than €700,000 for city charities. Normally St Ann’s vicar Canon David Gillespie and caretaker Fred Deane would be outside the city centre church accompanied by many volunteers with buckets and several choirs.

Not in 2020. This year there can be no choirs and many who make that special annual trip to St Ann’s to make their donation cannot do so. Canon Gillespie and his team, however, will be there, on the street collecting until Christmas Eve.

In addition this year, and for the first time, there is an option to donate online at the St Ann’s website www.stann.dublin.anglican.org

Every cent donated goes directly to charities supported by Black Santa, including the Simon Community, the Peter McVerry Trust, the Salvation Army, all of which work with homeless people, as well as Protestant Aid, Barnardo’s, St Vincent de Paul, the Laura Lynn Foundation and the Solas Project.

Black Santa in Dublin is modelled on a similar appeal run by successive Deans of St Anne’s Cathedral in Belfast for many years. It has become known as the Black Santa appeal because of the long, heavy black cloaks worn by clergy participating.

This year a concert of Christmas Music has been recorded from St Stephen’s Church (the Pepper Canister), Dublin, in aid of the Black Santa Appeal.