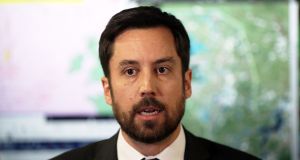 Minister for Housing Eoghan Murphy said the work of the Dublin Region Homeless Executive has been a “significant factor” behind the decrease. Photograph Nick Bradshaw

The number of homeless people in the State fell for the third consecutive month in April, with fewer people living in emergency accommodation than at any point in the last two years, the Minister for Housing has said.

Figures published on Thursday show there were 9,335 people in emergency accommodation in April, a decrease of 572 when compared to March.

While welcoming the reduction in people in emergency accommodation, homeless charities fear the number could rise again when lockdown restrictions are lifted.

Wayne Stanely, national spokesman for the Simon Communities of Ireland, said the charity is concerned that as Covid-19 restrictions ease “we could see a spike in homelessness”. He said this concern was particularly in rural areas “where we have not seen the increases in availability of rental accommodation due to the collapse of short-term lettings”.

Focus Ireland has also warned that that the sudden lifting of temporary prevention measures - such as a rent freeze and ban on evictions – could result in a new surge in homelessness.

Chief executive Pat Denniga said it believes Covid-19 can be “a turning point in the fight against homelessness”, adding that he hopes individuals who were accommodated during lockdown “will not be expected too return to the streets or hostels”.

The 2020 quarterly report, also published on Thursday, shows a 12 per cent increase in the number of people exiting homelessness into tenancies when compared to the previous year.

Speaking about the figures, Minister for Housing Eoghan Murphy said the work of the Dublin Region Homeless Executive has been a “significant factor” behind the decrease.

“Despite the current challenges posed by Covid-19 we have been able to consistently move families out of emergency accommodation into secure long term homes,” Mr Murphy said.

“The reduction in the homeless numbers has been achieved due to a significant number of households moving from emergency accommodation to tenancies.”

The Minister added that individuals and families accommodated in short-term accommodation secured in recent weeks, as part of the response to Covid-19 are still being included in the homeless figures.