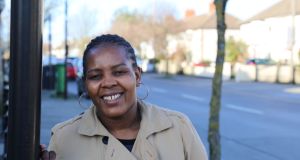 Sibusiso Lowrene, a single mother with two young children, was supported in moving out of direct provision

Through a new initiative established by the Department of Justice, Depaul has been providing support to accommodation centres around Ireland. It works with families and individuals who have been granted legal status to remain in Ireland.

It said it helped 328 people exit direct provision centres, including 168 adults and 160 children. In total, it worked with over 700 people, including 392 adults and 328 children.

Currently there are 5,645 people residing in 36 accommodation centres throughout Ireland, excluding the National Reception Centre, Balseskin. An additional 1,633 people are staying in emergency accommodation.

At present there are over 1,024 people residing in accommodation centres with some form of status.

Depaul CEO David Carroll said: “This initiative is so important as it mitigates the risk of people ending up in homeless services once they have been granted the legal right to stay in Ireland.

Sibusiso Lowrene, a single mother with two young children, was supported in moving out of direct provision and into the community in Dublin. She came to Ireland in February 2016 after fleeing her home country of Zimbabwe due to conflict.

“We are happy now,” she said. “When we first came to Ireland my kids were telling me ‘Mammy, let’s go back’. This is painful. Living in direct provision was a real challenge. I told them you need to be patient, one day things will change. They didn’t understand at the time.

“I am working as a carer now and I am really happy to be contributing and being a part of the community.

“Depaul showed me I can still do more than what I was expecting. I just want the best life for my kids.

“To go to school and have their own families and not to live the life I lived. I know they are here and they are free.”