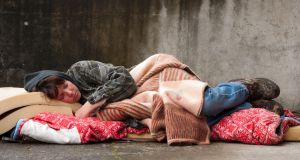 The number of women in emergency accommodation has been growing faster than men. Photograph: iStock

The number of families living in emergency accommodation across the State has increased by almost 350 per cent in the past five years, according to research by Focus Ireland and Trinity College Dublin.

The homeless charity and the university’s school of social work and social policy undertook an analysis of 500 different Government reports tracking 17 key indicators of homelessness since the start of the crisis just over five years ago.

Since mid-2014, the Department of Housing, Planning and Local Government has published data compiled by local authorities across the country showing the number of people living in emergency accommodation each month.

Focus on Homelessness, an analysis of this data by Focus and Trinity, charts the rise of homelessness across all ages and family types.

Outside of Dublin, the number of households in emergency accommodation has increased by 128 per cent since 2014 and climbed above 2,000 for the first time in 2019.

The majority of the number of adults in emergency accommodation (about 60 per cent) were aged 25-44 years. However, while all age groups have seen a rise in homelessness, the largest increase has been among 45-64 year-olds, with a 231 per cent increase since June 2014.

Focus Ireland’s director of advocacy and co-author of the report, Mike Allen, said the research would inform the charity’s work with State services.

“In order to end any crisis, it is vital to fully understand the situation. This unique collaboration with the school of social work and social policy at Trinity College Dublin clearly informs our work with the State to refine our services and to also develop policy recommendations that – if acted upon by Government – would help to greatly reduce the number of people becoming homeless.”

Mr Allen said Focus on Homelessness would be published quarterly, as the local Government reports become available from the Department of Housing.