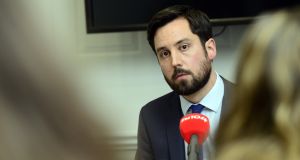 Minister for Housing Eoghan Murphy is set to announce a series of measures to help tenants during the worst of the economic disruption caused by coronavirus. Photograph: Cyril Byrne/The Irish Times

The Government has announced a temporary ban on evictions as part of a series of measures to protect renters during the coronavirus pandemic.

Minister for Housing Eoghan Murphy also announced a moratorium on rent increases for those affected by Covid-19 and said the notice period for tenancies of less than six months is being increased from 28 days to 90 days.

He said these measures will apply for the duration of the public health crisis.

Mr Murphy is to publish legislation giving effect to these changes next week. He met tenant and landlord groups in recent days on the measures.

Mr Murphy said he wanted to reassure many people living in rented properties who were worried about their living situation being affected by the outbreak.

“Today the Government approved new measures to give the strongest possible protection to all renters at this time of national emergency,” he said.

“A moratorium on notices to leave rental accommodation is being introduced as is a moratorium on rent increases so that people will be safe in their homes during this period.”

The Minister, who confirmed he was self-isolating as a precaution after returning from a trip abroad to see family, said those struggling to pay their rent could seek support through the rent supplement scheme.

“Yesterday’s announcement of forbearance by the banks, which I welcome, will also assist tenants in seeking support from their landlords. Early engagement by tenants in difficulty, both with their landlords and with social protection is key,” he said.

“I would like to thank the landlord and tenant organisations for their engagement and support in these measures. Notwithstanding this it is only prudent to put these temporary measures into law, which I intend to do with the support of the Oireachtas next week.”

In a statement, the Department of Housing said the emergency measures were intended to “complement those announced by the five main retail banks, in relation to the flexibility - such as three month mortgage breaks - which will be offered to those with buy-to-let mortgages whose tenants have been impacted by the virus.

“It is the Government’s expectation that landlords will pass that flexibility on their tenants...While tenants will be expected to pay rent during this period, income supports and rent supplement is available to those struggling to do so.

“Any rent arrears built up will be payable, but landlords have been asked to show forbearance and reach local arrangements in such circumstances.”

Stephen Faughnan, chairman of the Irish Property Owners Association, said that the “vast majority of property owners treat their tenants very fairly and enjoy an excellent relationship” with those in their properties.

“A huge proportion of property owners have accommodated their tenants over a long number of years on very low rents without increasing same, a fact that was ignored when the rent cap measures were introduced at the end of 2016,” he said. “It is now grossly unfair to assume that those same property owners will immediately move to evict tenants in financial difficulty.”

Three relatives dead after apparent murder-suicide in Kanturk, Co Cork 16:05
Covid crisis: Five dead in North and 727 new infections 15:24
Number in hospital with Covid-19 at highest point since May 13:41
Almost 20% of staff at Dublin hospital have antibody evidence of Covid-19 infection 13:23
Family proud of Irish volunteer ancestor who died on hunger strike in 1920 10:33