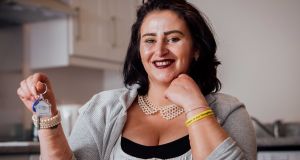 Homeless for 11 years, and having slept on the streets, various hostels and in a woods, Anne Marie McEneaney never thought she would have a place to call her own.

Last week she got the key to her own door, due, in part, to an increase in market availability as a result of the coronavirus pandemic.

The 29-year-old, who suffers from mental health conditions and is a former drug-user, said that living on the streets was incredibly tough.

“I’ve slept on the streets of Dublin on my own. I’ve slept in a cardboard box in the middle of the street. You’re woken up by six in the morning by security, and if you’re lucky you might get up before they start splashing the water all over the place.

“You have to have a weapon on you at all times, but if you’re caught with the weapon on you you’re going to have a charge sheet. Then you have the problem of where will you go and get money.”

She said that she “actually just didn’t believe them” when she was told she would get her own home.

“I was told that so many times over the years, I didn’t believe it. Now I have a two-bedroom apartment. I never thought I’d have my own home.”

Pat Doyle, chief executive of the Peter McVerry Trust, said it is “absolutely” easier to get access to accommodation for homeless people since the pandemic brought the country to a halt.

“It’s actually a good opportunity now because a lot of landlords don’t want to go to the market, they don’t want to put ads out and have people queueing down the road looking at apartments, so they’re happier to work with an agency like us to see if we can fill in the vacancy quickly.”

Mr Doyle said that in the month of April alone his charity has been able to house 20 individuals in long-term residencies.

“We’ve had more offers of late than we had in the months leading up to it. When there’s a buoyant market, and there’s lots of competition, the most vulnerable get dropped to the bottom of the market, such as homeless people.

“But at the moment everything is grinding to a halt so we are constantly getting offers of apartments, hotels, different types of accommodation, some of which we never would have got access to before.”

The most recent homeless figures also show that there was a decrease in the number of people in emergency accommodation in March, when compared to the previous month. In total there were 9,907 homeless people, which is just under 4 per cent lower year-on-year, and 241 people fewer than February.

Neil Moore (40), another individual who just secured his own home, said he was “nearly crying” when he was told he no longer had to live in hostels.

“I have COPD [chronic obstructive pulmonary disease], asthma, sleep apnoea and am diabetic, so I am particularly vulnerable to the virus,” Mr Moore said. “I couldn’t believe it when I was told I could move into my own place. I’ve never owned my own home, and it just feels amazing. I can even have my young lad over every second week.”

Ms McEneaney said that unlike most people coronavirus wasn’t her biggest concern, and that having her own place has given her a sense of relief she never thought she would have.

“Coronavirus isn’t a big deal to me. I know that sounds mad, but the worst thing that can happen is you die. Considering the life that I’ve had, apart from now, I’m not afraid of dying. My husband died in 2018, so I really don’t have much to live for, only for this [apartment] now.

“I’ve had the highest standards of support. It was all done for me, and now I have a bed to sleep in at night and I have a roof over my head.”

Dublin had sunniest month on record in May with almost 300 hours of sunshine 17:03
Farmer dies after falling from quad bike in West Cork 16:40
Travellers on halting site ‘thick with rats’ challenge Cork council housing plan 15:53
Black Lives Matter protest planned for Dublin is cancelled 15:39
New care home residents must be tested for Covid-19 under rule change 15:33

1 Luke ‘Ming’ Flanagan bares his bottom half to European Parliament
2 Black Lives Matter protest planned for Dublin is cancelled
3 With Lincoln looking on, the crowd dropped to their knees as 7pm approached
4 Covid-19: Harris urges people not to think it’s ‘mission accomplished’ ahead of next phase
5 Trinity College Dublin to resume with as much face-to-face teaching as possible
Real news has value SUBSCRIBE