Some 23% of cases occurred in more affluent households, according to new study 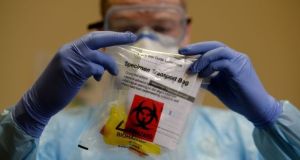 The poorest households have suffered the biggest increase in cases of Covid-19 since the start of the pandemic, though more affluent households have been harder hit, new figures show. Photograph: Alan Betson

This second report from the Central Statistics Office (CSO) on cases and deaths of the virus show that since the week ending Friday 13th March to the end of last week (May 22nd) there were 24,513 cases of Covid-19 and 1,592 deaths. The median age of cases was 48 and the median age of those who died was 83.

The greatest proportionate increases have however been in poorest areas. Where the median household income is less than €30,000 there were no recorded cases in the first two weeks but these households now account for three per cent. And where median income is €30,000 to €40,000 the proportion of cases has increased from 15 per cent to 22 per cent of the total.

In contrast, while those living in households where the median income is €60,000 or more accounted for more 25 per cent of cases at the start of the crisis and their incidence has fallen to 22 per cent.

Most of the country had its peak the following week when there were 2,016 new cases and 270 deaths nationally. Cavan and Monaghan hit their peak a week later when Cavan had a high of 182 new cases and Monaghan recorded 176 cases.

Roscommon has only seen a significant decrease in cases in the last week, ending 22nd May. New cases had been climbing there since April 3rd, from five that week to a high of 66 the week ending May 15th. There were 16 cases there last week. This reflects, says the CSO, movement out of the cities and into independent urban towns.

1 Cluster of Covid-19 infections at Kerry ‘house party’ investigated
2 Miriam Lord: Paschal’s win makes Phibsboro the financial capital of Europe
3 Reopening of pubs that do not serve food may be delayed beyond July 20th
4 Brightest comet of the century visible in Irish skies for the next week
5 Hundreds of substitute teachers may be hired full-time to keep schools open
Real news has value SUBSCRIBE