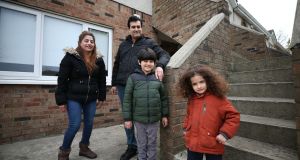 Sheno Mouradi with her husband and children: they were among the families who exited homelessness in March. Photograph: Nick Bradshaw

Almost 100 families in Dublin exited homelessness in March – a significant increase on the 84 families in March 2019, according to Dublin City Council.

The rise in exits is being attributed to the collapse in the holiday rental market which, observers say, has seen these properties come available for long-term leases.

The biggest difference for Sheno Mouradi (32) of having a home after eight months homeless, is being able to cook for her children, she says.

While most families in homeless accommodation – particularly in hotels – experience difficulties accessing nutritious food, for Ms Mouradi and her husband Reza it was becoming a matter of extreme concern.

Their sons Artin (8) and Aryan (4) struggled with the upheaval of losing their rented home of nine years in East Wall. Neither ate well in their family hub, and Aryan lost 3kg in weight.

“The children did not eat for us. In a Kurdish house we like to cook two times, three times a day but the rule in the hub was we could only cook once a day. The hostel provided food but the children, they didn’t like it and they [caterers] kept repeating the same food.

“It was very upsetting for the boys. They were asking to go home, to leave. My small child was very sick. He was in Temple Street hospital for two nights and they transferred him to Tallaght hospital for one week. I had a tough time.”

Following reports from the family GP and hospitals about Aryan’s dangerous weight loss, the family was prioritised by the council and housed with the support of the Focus Ireland Homeless Action Team.

They moved into the two-bedroom house in Raheny on March 19th. Focus Ireland, the lead charity working with homeless families in Dublin, has moved 80 families with 150 children out of emergency accommodation “since the start of the Covid-19 public health emergency”.

“There has been more accommodation on the market due to the impact of the pandemic on areas such as Airbnb,” said head of advocacy Roughan McNamara.

A report published over the weekend, however, questions how accessible much of the newly available rental accommodation is to homeless households who are dependent on the Housing Assistance Payment (HAP).

The Simon Communities’ Locked Out report finds, while across nine regions the number of properties available to rent at any cost increased by 38 per cent (504) between March 2nd and April 15th (from 1,330 to 1,834), the number available within HAP limits had decreased.

A household qualifying for HAP may only rent a property within a prescribed rental limit, set depending on how many people are in the household and where in the country they live.

“While on March 25th there were 510 rental properties available within a HAP rate category for one or more of the four demographic groups, this fell by 4 per cent to 491 on April 15th,” says the report.

Brendan Kenny, assistant chief executive of Dublin City Council, said there had been an increase in long-term leases in March, compared with March 2019, and numbers “should increase significantly in the months ahead”. Figures for April would, he expected, be higher.

For Ms Mouradi, the new home is a fresh start, for a second time. She came to Ireland in 2005 with her parents and two siblings, as programme refugees, under the auspices of the UN High Commission for Refugees. They had spent three years on the Iraq-Jordan border, a no-man’s land, living in tents.

She and her husband still have worries. He is a chef now out if work due to the pandemic. The house is far away from the children’s schools in East Wall.

Despite the continuing stresses, she smiles broadly when asked how she likes Ireland, and whether she would like to ever go back to the Middle East.

“Ireland is my country now. My parents, my brother and sister, all my family, we are very happy.”