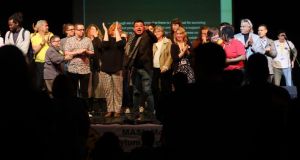 Irish people have a responsibility and an obligation to learn about the State’s asylum system and should demand an end to direct provision, a conference in Dublin has heard.

Residents from direct provision centres across Ireland packed out Dublin’s Liberty Hall on Saturday to mark the inaugural Movement of Asylum Seekers in Ireland (MASI) national conference which called for an immediate end to direct provision, an unrestricted right to work and access to housing supports via local authorities.

MASI member Vukasin Nedeljkovic criticised the Taoiseach and Tánaiste for defending the current system and accusing that those who seek to abolish direct provision as “not living in the real world”.

Responding to Leo Varadkar’s comments that without direct provision, people would be forced to live in containers, Mr Nedeljkovic argued that people already live in these conditions. “If you look at places like Athlone you will see people are living in containers,” he said. “Direct provision is a camp.”

Sociologist and LGBT rights activist Evgeny Shtorn argued it was no longer acceptable for Irish people to claim ignorance of the asylum system. “Knowledge is the responsibility and obligation of citizens,” he said. “People need to know what is happening today in this country.”

Ending direct provision will be impossible unless the Government builds more social housing, improves the health system and commits to protecting the rights of all children “regardless of the colour of their skin or immigration status of their parents”, said Mr Shtorn. “Let us build this new country together, this new reality that will be an example to others.”

MASI member Mavis Ramazani spoke of the guilt many parents feel bringing up their children within the asylum system. “Every day I ask myself what kind of child am I raising? When you are a parent in direct provision your child sees you as useless; your child knows you have no power over parenting at all.

“There are young people with dreams who are talented but they are going nowhere slowly. The reality is their lives are being slowly destroyed. The system is destroying lives; it’s inhumane.”

Lucky Khambule, co-founder of MASI, said the current right to work scheme still prevents many asylum seekers from accessing the labour market and called for unrestricted access to work for any person who claims asylum.

Those who do qualify for the right to work are only entitled to a six-month permit while those appealing a first decision on their application are excluded from the process, he said. They also face discrimination across all sectors, with many applicants from an African background struggling to secure a job, he added.

Bulelani Mfaco, who delivered the conference’s keynote speech, called for an end to the “brutal and dehumanising deportations” which have “no part in an ethical, human rights centred approach to asylum and migration”.

Those living in the recently opened 34 emergency accommodation centres around the country are “left without any information, access to vital services, or even the basic necessities for day-to-day living”, added Mr Mfaco.

Use of State lands

A spokesman for the Department of Justice said the Government was “actively working on securing additional capacity” for the nearly 1,400 asylum seekers staying in emergency accommodation.

The department is also examining the possible development of State lands for accommodation centres in the “medium term” but will only progress with these plans once “all arrivals have a safe place to stay each night”, he confirmed.

Any alternative model must be “capable of providing immediate access to food, shelter and medical care”, said the spokesman, adding that direct provision “eradicated the threat of exploitation” which existed under the former system of a cash payment on arrival.

On the issue of deportations, he said decisions to repatriate were “not taken lightly” and were only enforced as “a last resort”. A functioning deportation system is a “fundamental component of any country’s immigration infrastructure” to ensure people convicted of serious crimes can be removed from the State, he said.

He described Ireland’s right to work system as “one of the most open” in Europe and said it remains under review for further improvements.