Call for imposition of green tax on air passengers in budget 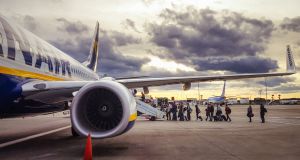 The move proposed by Social Justice Ireland would see charges of between €5 and €30 applied per passenger depending on flight duration.

Airline passengers should pay an environmental tax when leaving Ireland in a bid to help combat climate change, Social Justice Ireland (SJI) has said in its detailed pre-budget statement.

The move, versions of which have been introduced in other countries, would see charges of between €5 and €30 applied per passenger depending on flight duration.

“Jet kerosene is not subject to mineral oil tax at present, yet it is well known that air travel is a significant polluter,” SJI, a think-tank and justice advocacy organisation, said in its policy document. “As part of a comprehensive carbon policy to meet our national (reduction) targets for 2030 out to 2050, Social Justice Ireland proposes the introduction of a commercial air transport tax which would yield €210 million in Budget 2020. ”

In its pre-budget statement, SJI also calls for a 15 cent levy on disposable coffee cups (to raise €96 million a year); an increase in electric vehicle grants of €1,000; and a boost in associated infrastructure spending.

In addition, the organisation backs a carbon tax increase of €10 per tonne of emitted CO2.