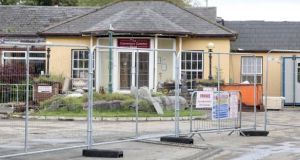 On Saturday, locals walked from the town of Oughterard out to the former Connemara Gateway Hotel, where they lined up on both sides of the road before dispersing. File photograph: Joe O’Shaughnessy

A large crowd has again taken part in a silent protest in Oughterard, Co Galway on Saturday over the possibility of a direct provision centre being located in the town.

It is understood the Department of Justice is in negotiations with the owners of the Connemara Gateway Hotel on the outskirts of Oughterard to house “less than 250” people while their asylum status is assessed.

However, while no final decision has been made, locals have vowed to maintain opposition to a centre opening up there and have held a number of protests over the past few weeks.

On Saturday, locals walked from the town out to the former hotel, where they lined up on both sides of the road before dispersing.

Thomas Welby, an Independent councillor for the area, said it was a very dignified protest and he estimated up to 3,000 people attended.

“The community has been anxious about the idea of this centre and they are disappointed in how they’re being portrayed,” Cllr Welby said. “There were no political sides, everyone came together, and it was all just local people.”

Cllr Welby said that the town is not saying no to migrants, but is against direct provision centres.

“The type of accommodation that is being proposed is inhumane. The department has said that nobody has come up with another solution but the department should do that. That’s their job,” he added.

Patrick Curran, a local businessman who helps lead the Oughterard says No to inhumane direct provision centres campaign, said it was silent because “refugees have no voice”.

“In the last week each and every day we have found more and more disturbing information about the inhumanity of the direct provision system and for this reason we are more determined than ever not to allow this social injustice to unfold on our doorstep,” he said.

“Oughterard is a tolerant diverse community. We welcome everyone with open arms. We denounce racism in all its forms.”

Speaking earlier this month on this issue, Minister for Justice Charlie Flanagan called on local residents to “step back” from the protests.

“I’d ask the people of Oughterard to step back now from the situation as is. There have been heightened tensions. This is a matter of real regret,” Mr Flanagan said.

Minister of State Seán Kyne was booed and heckled at a well attended public meeting in Oughterard just over two weeks ago when many of those gathered said they planned to fight any plans to provide a direct provision centre in their community.

It was comments by local TD Noel Grealish at this meeting that the type of people to be accommodated in the centre would be “economic migrants from Africa” whom he described as “spongers” that came in for stinging criticism. He did not attend Saturday’s protest.