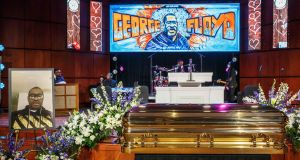 I remember a few years ago listening to a black woman on the radio talking about race. She shared that when she was in her mid-twenties someone gave her a sticking-plaster that was the same colour as her skin.

It was the first time she had seen such a thing and she was caught so off-guard that she burst into tears.

She wept as it dawned on her that she had never before questioned why plasters were usually a pinky colour, how she had just taken for granted that this was the way things were.

This trivial incident held open a door just wide enough for her to peep through and it led her to imagine the world in a new way; a world in which she might be free to live as a black woman in all her glory, no longer just a guest in a world made for white people.

As I write, I am stricken by the overflow of grief and anger in the US, the touch-paper that has been lit following the killing of George Floyd by four police officers in Minneapolis. I have watched the footage of the police officer’s knee on Floyd’s neck, an eerie nine minutes. I have read the transcript of Floyd’s last words until they finally petered out, laid out like a poem on the page.

I have listened again to some of Martin Luther King jnr’s speeches, each as fresh and honourable and counter-cultural as when it was first delivered over 50 years ago.

That the speeches are still as relevant today as they were then makes the blood run cold.

To use the words of my friend Pádraig Ó Tuama: if we are shocked by this it is because we haven’t been paying attention.

I live in the UK and I, for one, have not been paying attention.

Here, too, there is a legacy of institutionalised racism which continues to bubble away under the surface.

This is not to say that there is not much to celebrate about Britain, with its many decent, courteous people of good faith, and genuine efforts to achieve diversity and equality in much of our shared life.

Yet I have heard black mothers describe the advice they give their children, advice that it would never occur to me to have to give to mine. Don’t run in public, because you’ll look suspicious! For definite don’t run with anything in your hands, or you will look as if you have stolen something! Don’t answer back to the police or you are giving them a reason to arrest you . . .

And just a couple of years ago the veil was well and truly lifted with the Windrush scandal.

Hundreds of Commonwealth citizens who had been living, working and raising families legally in the UK for decades were wrongly classified as illegal immigrants. They lost jobs, homes, benefits, medical treatment, many were arrested and incarcerated in detention centres, and almost 90 of them being deported to the Caribbean where they hadn’t lived since they were young children. That this could have happened in 21st-century Britain says it all.

But there is hope, all over the world.

There is an up-and-coming generation of deeply thoughtful young peace-makers and reconcilers – of all ethnicities, many of them people of faith – who are listening.

They are doing the work of mining this primal sin of racism together and they are standing up to be counted, without violence, in a way that I (and most of my contemporaries) never got round to.

Maybe Ireland is charting a better course. Ireland does not have to bear the particular burden of having been made rich on the backs of slaves.

Yet even as I comment, here, now, I know that I can’t comment. I am not qualified, I haven’t paid enough attention, I have short-circuited. I am watching from the side-lines, ashamed of how casual I have been, with my innocent skin-tone sticking-plasters. But I want to listen, and I want to learn.

Lord have mercy on us all.