More than 3,500 parents waiting to have childcare scheme applications approved 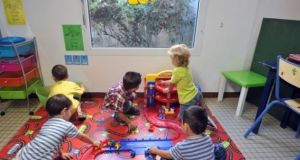 Figures from the first weeks of the operation of the scheme show that the highest applications come from Dublin and Cork. Photograph: Getty Images

More than 3,500 parents are waiting to have their applications to the Government’s new national childcare scheme approved, it has emerged.

The Minister for Children Katherine Zappone said she believes the waiting time for approval of these applications will take a number of days.

A number of users also have reported issues with the website.

Ms Zappone was speaking at an event to mark the opening of the scheme.

She has asked for patience as the scheme is further rolled out.

“This is a highly innovative and ambitious scheme and I am delighted that the initial volume of applications has been high. As of yesterday, nearly 12,000 applications, relating to over 17,600 children, had already been successfully submitted, and over 8,000 awards had been made to parents.

“We would ask parents and providers to please bear with us if there are any slight delays in the early days.”

Figures from the first weeks of the operation of the scheme show that the highest applications come from Dublin and Cork where there are 3,246 and 1,259 applications.

In Dublin, 2,504 applications have been awarded and in Cork the figure is 890.

Taoiseach Leo Varadkar said on Wednesday morning that the cost of childcare can be a barrier to parents who want to return to work.

“It can prevent people from staying in the workforce and can also be an obstacle to parents who want to take education and training.”

He said it can be particularly costly for women and also contribute to the gender pay gap.

He said future Governments would aim to give more generous subsidies and more parental leave but said it would only be possible if the economy is properly managed.

“The new national childcare scheme is about giving our children the best start in life. It’s an investment in making life easier for families, better outcomes for children, and helping to make Ireland one of the best countries in which to grow up and raise a family.”