21 Aungier Street, one of Dublin’s oldest buildings, was leased for homeless hostel but never used 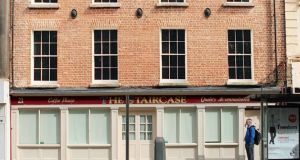 Number 21 Aungier Street was leased by the Peter McVerry Trust for emergency accommodation for up to 25 homeless adults.

Dublin City Council is paying almost €200,000 a year to lease a historic city centre building it planned three years ago to turn into a homeless hostel, but has never used.

In late 2016, number 21 Aungier Street, one of the city’s oldest buildings, was leased by the Peter McVerry Trust for emergency accommodation for up to 25 homeless adults. The council agreed to pay the rent of €16,250 a month.

However, in early 2017 Dublin Civic Trust, which restored the building in the 1990s when it had been derelict and under threat of demolition, objected to the development which it said could compromise its historic fabric.

The building, believed to date from 1667, is a registered historic monument, with any work requiring the consent of the Minister for Heritage. The council and the McVerry trust had not received this consent.

Following the intervention of the civic trust, the Department of Heritage ordered work be halted pending an application for consent. No application was made. Peter McVerry Trust chief executive Pat Doyle said at the time he saw no reason historic buildings could not be used for homeless accommodation. “If I could use the Áras, I would.”

However, the building has since remained vacant while the council has continued to pay the rent, which amounts to €195,000 a year.

Independent councillor Mannix Flynn said this represented a “shocking waste of money” and the lease should never have been signed.

“Anyone renting a building knows its use is subject to planning permissions and other consents, particularly when it is a historic building. This should never have been allowed to proceed without doing that due diligence.”

It was also unacceptable a historic building of national significance had been left boarded up, he said.

The council said it was working with the McVerry Trust to market the building and hoped its “commitment to this property will cease in 2020”.