Santa arrives with presents and reassurances at party for homeless children 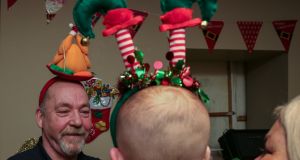 Elf-magic will help him to find all the children in emergency accommodation this Christmas eve, Santa told children at a party in Dublin on Wednesday.

Having been delivered to Liberty Hall on a fire truck by Dublin Fire Brigade, Santa dispensed presents and reassurance to about 75 children at the event – the first of a series of Christmas parties Focus Ireland will hold for homeless children it works with.

Among other festive events Santa will visit is one for 70 children accommodated in a hotel near Dublin airport, another for over 100 children at a hub in the north inner city, and a larger one taking place in Croke Park for about 300 children currently living at hotels and B&Bs throughout the city.

Siptu provided its cafe area for Wednesday’s fun for families in a nearby hub. There were sausages, spring rolls, sandwiches, cakes, face-painting, crafts, a clown, a magic genie and, of course, Santa.

Among those he saw was a family of four children aged 10, eight, four and two and their mother. “I will find you all,” he told them. “By elf magic I know where you are.”

“What about what room we are in?” asked one.

“Even what room you are in. I will look up my book of ‘naughty and nice children’. I can tell already, though, you are all nice.”

They beamed as they emerged from the “grotto” showing their presents. The 10-year old boy got a drone and a gift voucher for McDonald’s, the four-year-old an interactive pink dinosaur called Dino Learn and Dance.

Alicia Gayson-Laurence, case manager in the hub, explained that the parents were asked what present their children would like. These were bought – or sought from donors – and each was name-tagged.

“Events like this are so important. Some parents can’t afford to give their children an afternoon out. My job is to support the families to move out of homelessness as fast as possible, but then to minimise the traumatic impact of homelessness on the children.”

The children’s voices are central to this, and she and her team run regular focus groups in the hub, asking what they like, don’t like and would like. With many having come from perhaps several months of moving nightly between hotels of varying quality, many say what they like is that the hub is clean and their bed comfortable.

A dislike is not being allowed play in other children’s rooms, and that visitors are not allowed.

“What they would like? Well, some say a swimming pool, or an astro-turf pitch, which we can’t do. Recently one little girl wanted to have a friend sleep-over. We couldn’t do that, but what we did do is hold a pyjama party in the hub and we all dressed in our pyjamas, even the staff, got pizza and all watched a movie.

“We can’t eliminate the trauma of homelessness, but we hope to make some happy memories for them so when they look back it’s not all negative.”