Church of England distances itself from Irish language ruling on gravestone 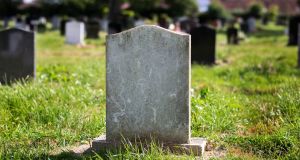 The family of Irish-born Margaret Keane want the words “In ár gcroíthe go deo” on the stone above her grave. Photograph:iStock

The Church of England has sought to distance itself from a decision by one of its ecclesiastical judges who ruled that an Irish-language inscription on a gravestone must have a translation with it to ensure the phrase is not mistaken as being a political statement.

The family of Irish-born Margaret Keane want the words “In ár gcroíthe go deo” on the stone above her grave at St Giles burial ground at Exhall, Coventry. Translated the words mean “in our hearts for ever.” She died in July 2018 at the age of 73.

“Given the passions and feelings connected with the use of Irish Gaelic there is a sad risk that the phrase would be regarded as some form of slogan or that its inclusion without translation would of itself be seen as a political statement,” he stated.

Though Mr Eyre is a recognised judge within the church, the Church of England has stated that it does reflect any policy.

“This decision does not reflect any national Church of England policy,” said a spokesman.

The spokesman went on to point out that Christianity in England was originally established in the country by Irish-speaking monks.

In 635 the Northumbrian king, Oswald summoned an Irish monk named Aidan from Iona – the island-monastery off the south-west coast of what is now Scotland – to be bishop of his kingdom.

Oswald granted Aidan and other Irish monks the small tidal island of Lindisfarne on which to found a monastery which became the centrepoint of the spread of Christianity in northern England.

The spokesman explained “The Irish language is an important part of the heritage of the Church of England. It was, after all, Irish speaking monks in Lindisfarne and beyond who played a central role in establishing the Church in what is now England.”

The application to the Consistory Court for the inscription without any translation came from Mrs Keane’s daughter, Caroline Newey.

The judge said she had argued that there was no need for a translation and that “the Irish language is regarded not just as a means of communication but as a vehicle of symbolic value.

“Mrs Newey says that the use of that language without translation is not a political statement but is a recognition of Mrs Keane’s identity and is to honour ... [HER]native tongue,” he said.

Mrs Keane was originally from Co Westmeath. Her husband Bernie, a native of Ballyhaunis, Co Mayo is a former president of the provincial GAA council of Britain, also made the journey from England. He was invited to meet Queen Elizabeth II when she visited Croke Park in 2011.

Mrs Keane was a member of the Roger Casement’s GAA club in Coventry for many years.

She was the first female member to be elected as assistant secretary to the club in 1982, a position she served until 1988 and then serving as treasurer to the club for 20 years.

Mrs Keane served on the county board in various positions and was a regular volunteer on the gate at Páirc na hÉireann, the Coventry GAA grounds.

She was honoured in 2017 in Croke Park by then GAA president in recognition of her outstanding commitment to the association.