Playgrounds in Dublin to reopen this week ‘at parents’ own risk’ 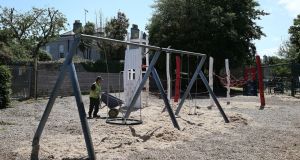 Playgrounds in Dublin city will reopen by the end of this week, but without any council supervision or cleansing regime, Dublin City Council chief executive Owen Keegan has said.

Elsewhere around the country playgrounds re-opened for the first time in three months on Monday.

Dublin city councillors at a meeting on Monday night asked when playgrounds would be opened in their areas.

Mr Keegan said they would be reopened by the end of the week but on a “pre-Covid 19 basis” meaning “they will not be supervised and cleansing will not be in place”.

“We’re happy to do that on the basis we have been asked to do that by central Government, but there are clear risks associated with that,” he said.

No guarantees could be given in relation to safety, and while supervision would be a matter for parents, “it is not unknown in our playgrounds that unsupervised children have access…parents can decide to take that risk or not to take that risk”.

Last Friday the council had said its playgrounds, which have been fenced off since the middle of March under coronavirus restrictions, would remain shut on Monday, despite assurances from Taoiseach Leo Varadkar earlier in the day that the facilities could open.

Mr Varadkar had confirmed that “outdoor facilities and amenities for children” could reopen under the acceleration of Phase 2 of the Government’s roadmap for easing Covid-19 restrictions. This would include the reopening of playgrounds as long as they are supervised, he said.

However, Dublin City Council said it “does not operate supervised playgrounds” and so would not be reopening these facilities. The council operates about 100 playgrounds, almost 70 of which are in public parks with the remainder located in the grounds of social housing complexes.

Dun Laoghaire-Rathdown and Fingal county councils both confirmed playgrounds would re-open over the coming days following safety inspections of all equipment.

Fingal said it was working on a plan to allow for the “phased reopening of playgrounds” and that parents and guardians would be expected to supervise their children while in the playground in line with existing physical distancing and hygiene guidelines.

A Dun Laoghaire-Rathdown spokesman said all playgrounds were expected to reopen by the middle of this week and new guidelines signage would be put in place.

As in Fingal, parents and guardians using parks in Dun Laoghaire-Rathdown will be expected to supervise their children, said the spokesman.

A spokeswoman for the Local Government Management Agency (LGMA) said all local authorities would open playgrounds this week subject to “necessary preparatory work” including the provision of appropriate signage.

Adrianna Docon, a single mother living in Portobello, told The Irish Times that looking after her three-year-old daughter in a small apartment without access to a garden during lockdown had been challenging.

Speaking in St Patrick’s Park in Dublin 8, Ms Docon said she would like to see playgrounds reopen as soon as possible. “I’ve been coming to this park since it reopened but it’s very hard to explain to a child why the playground is closed.”

Ms Docon says appointing council officials to supervise playgrounds would be a waste of time. “Kids are kids, they will not stay apart just because there’s someone supervising. They have to play together.”

Tanya, who declined to give her surname, said she was happy having access to the park and that her two-year-old son did not need to use the playground. She and her husband have decided not to use libraries or playgrounds as they’re keen to travel to Donegal as soon as restrictions are lifted to visit family, she explained.

“We want to get back to Donegal and so we’re keeping the contact as little as possible until we get there. For us the park is plenty. We don’t have a garden but we have a courtyard and we have access to great parks.”

Vjerana Visnjic would like to see the playgrounds reopen but is worried they may be overcrowded as schools remain closed. She says her two-year-old daughter Isabelle was upset when the playgrounds first closed but has grown accustomed to playing on the grass. “We have a friend with a climbing frame and swing and slide in her garden so we go there to play. We also have a community garden outside our flat.”

Sara Ynga is relieved to see the council take its time in reopening playgrounds to avoid a second surge of the virus. Living in an apartment with two children has been challenging during lockdown, she says. “We don’t have a patio and those of us who live in the city centre find it difficult. Even more so if you’re a foreigner and don’t have family here, you can feel quite alone.”

Her six-year-old son Sebastian says he would like to playground to reopen but his mother is more cautious. “There’s no hurry, we should just take it step by step carefully.”

The programme, published in recent weeks seeks to turn the heart of Dublin city from St Stephen’s Green to Mountjoy Square, and the Custom House to Stoneybatter into a “pedestrian, cyclist, public transport priority zone”.

Large-scale bus diversions, restrictions on cars and a widespread reallocation of road space to pedestrians and cyclists are planned. Some inner city streets could be pedestrianised with restaurants and cafes permitted to use the outdoor space for tables and chairs.

However, some disabilities groups have urged councillors not to support the plans, which are already in the process of being implemented.

Robbie Sinnott, who represents Voice of Vision Impairment has described the plan as a “cyclocentric dream” which “steamrolls the human rights” of people with disabilities.

Changes to bus routes and bus stops in particular would cause huge difficulties for vulnerable pedestrians he said. The plan would see bus routes diverted away from College Green and Bus stops will be distributed over a wider area, with some “removed completely” if social distancing cannot be achieved.

In a letter to councillors Mr Sinnott said there could be “no adequate training to teach the new bus routes, so disabled people will be excluded from them”. New routes will leave large areas “bus-free and too far away from bus-stops to be accessible by vulnerable pedestrians”

The most vulnerable pedestrians, who could not use public transport, and relied on cars and taxis would find the city inaccessible, he said. The strategy was “a 100 per cent cyclists’ charter” he said.

“Where once a disabled person could travel in their own city; increasingly, this right is being denied to them by design…literally, we are being disabled by design.”

Plans to pedestrianise College Green were “rejected already by An Board Pleanála for good reason and disability access and safety was one of them” he said.

“Covering the footpath with chairs and tables is against the stated policy of the council. It is supposed to be decluttering the city. Disability groups particularly the visually impaired are seriously worried about this issue.”