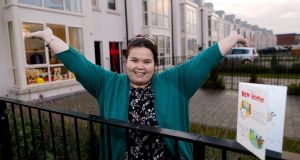 Dolores O Brien and her five children have moved into their new home in the Chanel Manor development in Coolock, Dublin. Photograph: Maxwell Photography

Two new social housing schemes, at differing stages of development by housing bodies, were announced in north Dublin on Monday.

At Coldwinters in Fingal, the sod was turned on a scheme of six units by the Peter McVerry Trust. The housing waiting list in Fingal is more than 8,000 households.

This is the first time the charity is building new homes, having previously focused on acquisitions and the refurbishment of derelict buildings. Describing the new scheme as a “milestone for us as a housing provider”, the trust’s chief executive Pat Doyle said the scheme, which will also include a community building, would cost €1.4 million.

“The new tenants will have access to both visiting and on-site supports from Peter McVerry Trust staff and the community building will provide residents with a central location in which to socialise.”

It was the charity’s aim to deliver more small-scale building projects, he said.

“This scale is perfect for us . . . because that means that we can develop small schemes across multiple communities and avoid larger concentrations of people in social housing, particularly people who have a long or complex history of homelessness.

“This will be the first phase of new-build projects that we will commence in the next 12 months and demonstrates our commitment to delivering a housing first approach to homelessness.”

In Coolock, a 16-unit development was opened by Minister for Housing Eoghan Murphy.

Developed by Respond! housing, Chanel Manor is now home to 16 families, including 103 people of whom 69 are children.

All 16 families are drawn from the Dublin City Council waiting list of almost 20,000 households.

Mr Murphy, who was “delighted” to open the homes, said providing homes was “a permanent solution to housing families”.

Dolores O’Brien and her five children are among the new residents of Chanel Manor.

“I cannot tell you how thrilled I and my family are that we are now in our new home. The house is beautiful. We now have enough bedrooms for us all and I truly believe this is the lease of life we all needed. We were in seriously overcrowded conditions for years before and this was affecting us all,” she said.

“Now the children are happy to have their friends come around and I feel this is our new hope – the hope that we can live now in the space that we need – and the hope, which I can see is already happening, that my children are happier and more confident about the rest of their lives.”