However, Dublin figures indicate the 200 beds will be surpassed by Christmas

The former Longfield’s Hotel on Fitzwilliam Street in Dublin opens this week as a 30-bed hostel where homeless people can stay for six months. It will be run by the Simon Community in conjunction with Dublin City Council. Video: Bryan O'Brien 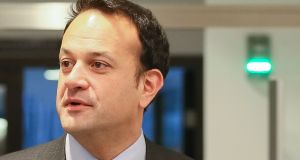 Taoiseach Leo Varadkar told the Dáil on November 29th that 200 additional beds would be in place by December 18th. Photograph: Stephanie Lecocq/EPA

Just two-thirds of the 200 extra emergency beds for the homeless, which Taoiseach Leo Varadkar promised would be open in Dublin by yesterday, have come on stream.

Figures from the Dublin Region Homeless Executive, however, indicate the 200 number will be surpassed by Christmas.

In response to two deaths of men who had been sleeping rough in Dublin, Mr Varadkar told the Dáil on November 29th that 200 additional beds would be in place by December 18th.

“We want to get to a position where we’re assured that there will be a bed available and shelter for everyone who needs it over the winter period and into the spring and summer as well,” he said.

A spokeswoman for the DRHE said on Monday that 124 additional emergency beds were operating since last month. Some 30, operated by the Peter McVerry Trust (PMVT) have opened in Drumcondra, while 60 more also by the PMVT have opened in Cabra. Some 21 are in Portobello and 13 beds, operated by Dublin Simon, are open in Clonskeagh.

Another 104 beds are due to open by the end of this week.