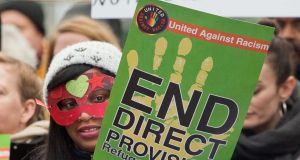 At the end of November there were 5,335 people living in direct provision, including more than 1,100 people aged under 12. Photograph: Tom Honan.

More than €400 million has been paid to private companies for operating the network of direct provision centres for asylum seekers across the State over the last seven years.

Minister for Justice Charlie Flanagan said these “direct provision” firms had been paid more than €57.7 million for the 11 months to the end of November, an average of some €1.2 million a week.

In a written Dáil reply to Sinn Féin TD Donnchadh Ó Laoghaire, the Minister said the figure for this year included €48.7 million for commercial contracts; €8.25 million for contracts to run centres in State-owned properties, and more than €750,000 for “self-catering” properties. He said a total of €60.27 million was paid out to the companies last year and the total received by these firms since 2011 has been €404 million.

The direct provision system was established in April 2000 and sees asylum seekers accommodated in privately-operated centres while they await a decision on whether or not they can remain in the State.

The department said there were 206 people in the direct provision system for more than seven years, 221 others for between five and seven years and 596 individuals who had been there for three to five years.

A spokesman for the Department of Justice said 81 per cent of those in direct provision at present had been there for three years or less, which he described as “a radical improvement”.

“Where some applicants have been waiting for lengthy periods, departmental strategies to address legacy cases and backlogs are taking effect by prioritising oldest cases first,” he added.

He said that the International Protection Act 2015 reformed the system by introducing a single application procedure. This means that an applicant will have all aspects of their claim, refugee status, subsidiary protection status, and permission to remain, examined and determined in one process. The landscape of processing and delay has substantially changed.

A protest took place over the weekend outside a property in Killarney, Co Kerry that is being used to house 55 male asylum seekers. Locals said they were unhappy at a lack of debate about the move and that local people with housing issues should be prioritised.

In a Twitter post about the protest, Mr Flanagan commented that the incident was “sad”, particularly in the run-up to Christmas.