Some work to help those travelling: ‘There isn’t a stereotypical Irish abortion seeker’ 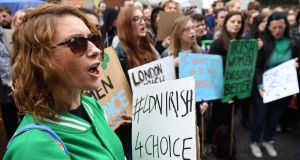 Protesters hold up placards during the London March for Choice outside the Embassy of Ireland in central London in September. Photograph: Chris J Ratcliffe/AFP/Getty Images)

This year’s St Patrick’s Day parade in London marked a significant landmark for a group of Irish campaigners who gathered at Hyde Park Corner before starting to walk together. It was the first time that a pro-choice group had been allowed to march in the event.

Under the banner of the London-Irish Abortion Rights Campaign, the group of mostly women held aloft placards with images of Countess Markievicz, St Brigid and Queen Maebh.

“At home and abroad, this is no longer a fringe issue any more. It is very much a mainstream issue,” said Cara Sanquest, from the campaign.

Among their aims was to to illustrate the number of Irish women who travel every year for terminations that they can not have at home. The department of health in the UK said that there were more than 3,200 abortions performed on women resident in the Republic of Ireland in 2016.

Set up last year, the London-Irish Abortion Rights Campaign says it has 1,000 supporters who go to events with 150 of them co-ordinating projects and lobbying MPs, all with the aim bringing in abortion rights for women in Ireland, both north and south of the Border.

Sanquest, who is from Cork but has lived in London for three years, said they were pleasantly surprised at the reception they received at the parade. Many of those involved in the campaign had not previously engaged with the Irish community in Britain since moving from Ireland, but had become interested by the abortion issue, she said.

“A lot of people assume that there is going to be opposition there but in this country, it is not a controversial issue the way that it is in Ireland. Abortion here has been legal for 50 years this year so this is something that people are talking about every day but it is an accepted part of women’s healthcare,” she said.

“This [movement] is a way that a lot of people are engaging with the Irish community. They are not having a big presence, this is the thing that has made them interested.”

The participation of pro-choice campaigners in the St Patrick’s Day parade is far removed from the experiences of Ann Rossiter, the feminist activist and writer who had a backstreet abortion in London in 1963, two years after she had moved from rural Ireland. She took part in protests in the run up to the 1967 act which legalised abortion and supported Irish women travelling to get abortions from 1980 via the Irish Women’s Abortion Support Group (IWASG), which drew the ire of the Irish community in Britain.

“There was virtually total opposition on the part of the ‘mainstream’ Irish communities to abortion; it was largely unspoken but very much a reality and reinforced by the Catholic Church,” she said. “Those of us working in the alternative community, whether on reproductive choice or other progressive issues, not least sexuality, tended not to engage with the mainstream.”

Rossiter, who has written Ireland’s Hidden Diaspora, the ‘abortion trail’ and the making of a London-Irish Underground, said the IWASG operated for 20 years, raising funds to help women with costs for clinics and transport through dances and other events, which in turn created this alternative Irish community.

“Now that increasing numbers of young, and sometimes progressive, people are beginning to take up posts in mainstream Irish organisations in Britain, we are beginning to see some changes in attitudes to abortion. However, I see very limited enthusiasm from them in taking up the pro-choice cause in practical ways such as assisting Irish abortion seekers,” she said.

One person who has continued the work of helping Irish women with the logistics behind travelling to get an abortion is Mara Clarke, the founder and director of the Abortion Support Network, a charity started in 2009. In their first full year in operation, they received calls from 89 people. Last year, this stood at 801.

“Being a parent is a really big deal and it shouldn’t be a punishment for a broken condom or a lapse in judgement or a rape or a non-viable pregnancy and not having £400 to £2,000 in the bank,” said Clarke.

An American, she has lived in England for 12 years and now runs 70 remote volunteers who help women in Ireland arrange financing to come and get procedures, advising on the best places to travel and at what time.

“There are so many contacting us because more people know about us. Is the need growing? I don’t know. We heard from 801 [last year] but we only fund about 25 per cent of those who contact us. But we have not turned someone away due to lack of money on our part in five years. The majority of what we do is explain to people how to afford to come over without our help. They think it will cost €1,000 to get here,” she said.

Stressing she is “not a doctor, not a counsellor”, Clarke says that often women who want to travel to the UK feel they are restricted because of limited funds but they may be aiming to travel to more expensive parts of the country like London at peak times.

“We are the people that when you have made your decision and the only thing in your way is money,” she said. “We ask how much money that they have. Then we will do a dance. It is really practical. We will open Skyscanner on the computer – we don’t let you fly to Heathrow. We give them the least expensive way to travel over.”

There is no typical woman who contacts them for help, she says, with ages ranging from 13 to 53. Some need visas to travel and many are escaping abusive relationships, while some have just been unable to get an overdraft to afford the journey. There have also been cases of gang rape. Frequently abusers will try to control their partners with pregnancy by sabotaging birth control, she said. “It is really hard to leave someone if you have one in the belly and one in the breast.”

Most of the funding for their operations comes from private donors, with contributions typically spiking at timesF when the issue hits the public consciousness in Ireland, such as the death in 2012 of Savita Halappanavar in University Hospital Galway. “When people get outraged, I would say the money tends to go 50/50 to the campaigning groups and for us,” said Clarke. These contributions are dubbed “rage donations”.

Changes in the law

Campaigning for changes in the law is left to others, however. “We say that we are the plaster and they are the cure.”

The profile of women who are coming to get abortions remains very varied, said Rossiter.

“I think there continues to be considerable numbers of women in their 20s, and numbers also who already have children, numbers of married women or women with steady partners. They come from the various social classes and have various levels of education. There isn’t a particular stereotypical Irish abortion seeker,” she said.

The cost of getting the procedure can rule out some, said Sanquest, and the issue can become one of means. “It creates a two-tier system: if you have the money you can travel, but if you don’t and you have a barrier, then you are further disadvantaged. That is another layer of trauma,” she said.

Whether next year’s proposed referendum will result in changes to legislation is uncertain, said Rossiter.

“It’s in the lap of the gods, I think. As you know, there’s a huge effort being put into the repeal campaign from a vast array of organisations throughout the Republic. How much ‘middle Ireland’, older voters and young first-time voters can be enticed is anyone’s guess. Gay marriage and women’s bodily autonomy are not the same, not by a long chalk. However, the success of the former is a positive marker.”