‘Only half’ proposals for improving asylum system in place 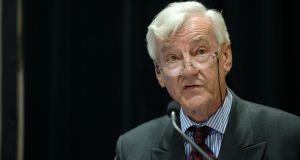 A report by a working group chaired by Dr Bryan McMahon published a total of 173 recommendations for the asylum system in June 2015. File photograph: Dara Mac Dónaill/The Irish Times

The Government has failed to initiate or implement nearly half the recommendations made by the McMahon report to improve conditions for asylum seekers, the Irish Immigrant Support Centre has said.

The Working Group on the Protection Process including Direct Provision, which was chaired by retired High Court judge Bryan McMahon, published a total of 173 recommendations in June 2015.

These included ensuring that newly arrived asylum seekers received a decision on their application within 12 months and that they be given the right to work after nine months.

In July, Minister for Justice Charlie Flanagan said there had been a “radical improvement” in the length of time people spend in the direct-provision system and said 98 per cent of the recommendations made the McMahon report had been implemented or were in progress.

However, Nasc, the Irish Immigrant Support Centre,has issued a report in which it accuses the Department of Justice of only implementing 51 per cent of the recommendations.

“We were very surprised when the Government announced its 98 per cent figure – we were seeing something very different on the ground in our work with people in the protection process and in the direct-provision system,” said Nasc chief executive Fiona Finn.

The Nasc report described the HSE’s inaction in implementing recommendations as “profoundly problematic”, adding that the health executive had only fully implemented one of the 34 recommendations it was charged with following the report.

“This is a population with a high possibility of having experienced torture, gender or sexual-based violence, post-traumatic stress, and other vulnerabilities which need to be identified so that the appropriate supports and services can be put in place as soon as possible,” said Ms Finn.

She warned that backlogs in the protection system continue to be a problem despite the introduction of a new single procedure to speed up waiting times under the International Protection Act 2015 .

The report also underlined the need to provide greater support for unaccompanied children and raised concerns over the physical condition of centres, saying changes had been “slow and ad hoc”.

A spokesman for the Department of Justice rejected the findings of the Nasc report, describing it as “subjective” and “unfair”.

He said the department had published three progress reports in relation to the McMahon recommendations. “It does not seem reasonable that Nasc would, without presenting evidence, declare as unimplemented, recommendations that are internal to other bodies and that those bodies have stated are implemented,” he said.

A statement from the HSE said: “As the report was only published today, HSE Social Inclusion is not in a position to provide a response until its contents have been read in-depth.”

A total of 4,838 people are living in direct-provision centres across the State, according to the latest data from the Reception and Integration Centre, with people spending an average of two years in the system.