Homeless accommodation must be ‘spread around’ Dublin

The former Longfield’s Hotel on Fitzwilliam Street in Dublin opens this week as a 30-bed hostel where homeless people can stay for six months. It will be run by the Simon Community in conjunction with Dublin City Council. Video: Bryan O'Brien 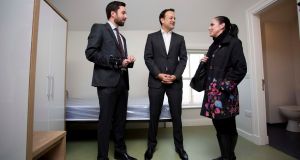 Emergency accommodation for the homeless must be opened in wealthy as well as poor areas, Minister for Housing Eoghan Murphy has said.

Speaking at the opening of a new homeless shelter on Dublin’s Fitzwilliam Street on Monday, Mr Murphy said it was “important we spread services around the city”.

The 34-bed facility is opening a decade after Dublin City Council bought the former Longfield’s Hotel with the aim of refurbishing it as a homeless hostel. Planning objections, legal challenges, political opposition – all to its location in one of the wealthiest parts of the city – and the recession got in the way of it being put to its intended use.

Among those who led objections in February 2015 was Mr Murphy’s constituency colleague Kate O’Connell TD. As Dublin city councillor she referred to homelessness as a “buzz issue” and voted against the plan, saying it would not provide value for money. She was accused of “nimbyism”.

On Monday, however, she said: “It was not the location I took issue with. It was the fact that no net increase in beds was being provided in the proposals in front of me and the council had spent close to €10 million on the property and done nothing with it for years...There was no comprehensive budget or plan provided.”

Her position was that the council should have been providing “real housing solutions, not hostels”, and she had identified apartments which could have been purchased “to accommodate people in homes with immediate effect”.

Mr Murphy said while it was “important that members of the local authority are allowed to do their work and to exercise their function... from our point of view this is the right use for this location”.

The hostel, which contains single, twin and couple rooms, each en suite, and four self-contained units with cooking facilities, will be run by Dublin Simon. People will be able to stay for six months, will not have to leave during the day, and will each have a case worker.

Describing the facility as “fantastic”, the Minister said he was “confident” there were enough beds to ensure no one would have to sleep rough this winter.

The most recent official rough-sleeper count last month found 184 people sleeping on the capital’s streets. The Dublin Region Homeless Executive has committed to providing 200 new emergency beds by the end of the year.

Asked if he could “guarantee” there would be fewer homeless children in Christmas 2018 than the current 3,194, he said: “We’re doing everything that we can working with our partners in the voluntary sector – with Dublin Simon, with McVerry, with Focus and with the others to get children and to get families into permanent long-term, accommodation.”