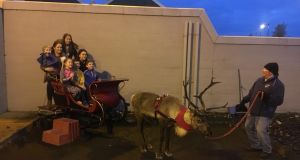 A north Belfast interface once synonymous with sectarianism, anger and violence played host to Santa Claus, reindeer and a funfair over the weekend.

A seasonal goodwill message of “move forward together” was delivered to hundreds of people at the first cross-community Christmas tree light switch-on and carol service on the Crumlin Road, where the Twaddell-Ardoyne Shankill Communities in Transition (Tascit) event took place.

For the past eight years a small carol service has been held in the area, but this was the first family fun day backed by the nationalist and unionist communities.

The area has previously been a flashpoint for serious public disorder, with a loyalist protest camp set up in 2013 after the Parades Commission refused to allow a return leg of an Orange march to pass a section of the Crumlin Road close to nationalist homes.

A range of talks aimed at ending the impasse, which over the years cost about £25 million to police, had all ended in failure until last year, when a deal was brokered by businessman Jim Roddy and Rev Harold Good to end the dispute.

On Saturday there were funfair rides, live reindeer, Santa’s grotto, hot chocolate and candy floss to enjoy ahead of a carol service, supported by the Salvation Army band.

Teenagers from the Our City programme, involving the Hammer Youth Club from the Shankill and Ardoyne Youth Club, shared a common prayer and messages of hope and inspiration for those gathered.

Luighseách McMaster (16) was one of the young people involved and said it was “amazing getting everyone together from both communities and having fun and joy”.

“The Our City programme has really helped me understand other people from other communities,” she said. “I only started in September, and I tell you what, it’s the best thing I have ever done.”

Seán Oliver from Tascit said the event had been a long time in the making.

“People associate Ardoyne and Twaddell with the parades and all the issues around it so it’s great to have people and their children from all those areas mixing and having a great time,” he said.

A place for goodwill

Fr Gary Donegan led the carol service and a blessing that also involved Presbyterian, Methodist and Church of Ireland ministers.

“The idea is that the community had claimed this place for goodwill over Christmas,” Fr Donegan said. “This community quite often gets adverse publicity, but they are incredible people so this is saying ‘This is what we should be getting publicity for.’ ”

Rev Good said it was a significant day and part of “a journey that these folks have been on for some 18 months, a journey to a new understanding, a new relationship, getting to know each other”.

“What better way than to bring your children, have fun together, drink hot chocolate together and sing together,” he said.

Winston Irvine from the Twaddell Woodvale Residents Association said it was “a hugely important, symbolic day for both communities, given where we have come from”.

“In the end we have to heal relationships in the area and rebuild the community, and that sense of community renewal is what people see as the way forward.”

Alex Trainor, who lives beside the Ardoyne Ambulance Station where the event took place, said: “It’s absolutely fantastic, what it symbolises. It’s great to see both communities coming together. It has been a long time waiting.”

Ms Mallon said communities celebrating Christmas together was a positive step while Mr Kelly said it was good to see people had reached out to each other.

“We are right on what used to be the interface, and I enjoy actually saying that – used to be – as I hope it is now a thing of the past,” he said.