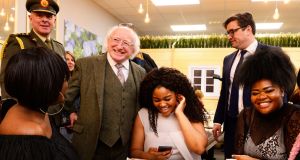 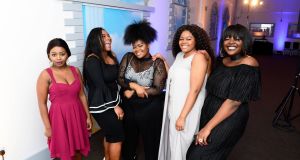 President Michael D Higgins has said he hopes the recommendations of High Court judge Bryan McMahon on improvements to the direct provision and asylum process will be “fully implemented”.

Mr Higgins was speaking at the Mosney direct provision centre in Co Meath on Monday, where he presented 10 bronze Gaisce awards to young people living there. It is the first time people in the direct provision system have taken part in the President’s awards, a personal development programme for young people aged 15 to 25.

He said the circumstances of a Gaisce achievement were “incredibly important” and he had been struck over the years he had been presenting them by the “differences in circumstances” of the recipients.

The achievement was, he said, a personal one. But it was also usually achieved through working with others and delivered “a real benefit beyond the self, into the community”.

The President acknowledged the work and leadership of “one of the great citizens we have”, Mr Justice Bryan McMahon, who chaired a working group to examine improvements in the protection process.

In his third and final progress report in June, the judge said 169 of his recommendations had been implemented. Some 36 were still in progress or partially implemented.

Those still in progress included some on the physical infrastructure of reception centres, as well as recommendations that interpreters in the asylum process had appropriately accredited qualifications.

“I do wish to welcome the continuing commitment by the Government to act on the recommendations of the report,” Mr Higgins said.

“As a former member of cabinets myself, I know that vigilance is required to ensure that recommendations of reports of this nature are fully implemented.”

It was not just one agency on which responsibility fell for improving the asylum process, but involved all our services at different levels, Mr Higgins added.

Speaking to reporters afterwards, the President said he had been very anxious that the Gaisce awards be extended to make them inclusive.

He said he had also been anxious to “see how far we were on with Bryan McMahon’s report” and he hoped that as he visited other direct provision centres during 2018 that “we will see the full implementation of Mr Justice McMahon’s recommendations to us”.

Mr Higgins said it had been “wonderful” meeting the young people from different backgrounds and countries.

The achievements of the young awardees included challenges in physical activity and sport, organising talent contests, growing their own food produce and community work.

To support their efforts, Gaisce formed a partnership with Cultúr, a community centre based in Navan, which works with migrants, asylum seekers and refugees.

The main objectives of the programme were to help young people in direct provision to experience better fitness levels, to provide them with improved community links and a better understanding of Irish culture, as well as psychological benefits.

Twelve participants, from countries such as Zimbabwe, Kurdistan, Kosovo and the Democratic Republic of Congo, started the scheme in April and the 10 who successfully completed their four challenges were presented with their awards on Monday.

Media photographs of the recipients were permitted only inside the venue where the presentations took place, at the request of the direct provision centre management.