Rally for Life protesters ‘not represented by any political party’

Thousands of people from all across Ireland have taken part in an anti-abortion demonstration entitled the ‘Rally for Life’ in Dublin city centre. Video: Bryan O'Brien 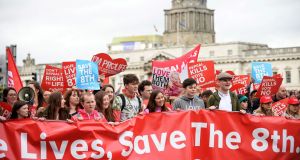 One of the speakers at Saturday’s Rally for Life summed it up in six words: “They have awoken a sleeping giant.”

The people who attended the vote No march in Dublin were not, by and large, political activists, seasoned protesters or members of political parties.

Their ranks were not swelled by the support of students unions, trades unions or taxpayer-funded lobby groups.

And yet, by any measure, it was one of the largest demonstrations in recent years and will certainly go down as the biggest single event of the abortion referendum campaign.

The significance of this will probably not be lost on the political class. These voters, who are remarkably engaged, represent a significant percentage of the population. And yet they are not represented by any political party in the Oireachtas.

However, resistance to this unjust referendum proposal grows stronger by the day.

A large number of Irish people indisputably have understandable concerns about the Eighth Amendment. These concerns are motivated by compassion and empathy for women who find themselves in crisis situations. Those concerns have been taken and exploited by a small and determined lobby group and warped into a situation where people are now being asked to vote for an abortion law that is significantly more liberal than the law on the statute books of the United Kingdom.

Irish people do not want a UK-style abortion law. That seems to be the clear message in opinion poll after opinion poll. The impact of such a law here would be much greater than simply shifting the location of abortions for Irish women. It would fundamentally change the culture of our island.

The often-cited and horrifying statistic that in the UK and Germany, a pre-natal diagnosis of Downs syndrome will result in abortion more than 90 per cent of the time should make us think. Hearing the remarkable young woman and Down syndrome campaigner Charlie Fen’s plea for mercy to retain the Eighth from the podium brought tears to my eyes.

Mothers who choose abortion are not bad people. They are people who are told abortion is the culturally accepted thing to do in such a situation. Within a few years of legalising abortion, every country that has done so has discovered that it stops being the last resort of desperate women and becomes one of the first options presented to expectant mothers. I know this first hand with one of my wife’s pregnancies.

There is a reason that the pro-choice lobby has been so consistently supported by UK abortion providers. Just like Big Tobacco wants to create more smokers, and the alcohol industry wants more drinkers, the abortion industry is interested in acquiring more customers.

In this debate we talk a lot about our compassion for women in difficult situations. But it’s important to remember that we as Irish people see a woman in a crisis, the abortion industry sees a potential customer. Legalising a UK-style abortion model here doesn’t just legalise abortion, it changes the entire way we talk to pregnant women about the crises they may face in pregnancy. Abortion goes from being the last thing that is considered to the first solution that is offered.

Ireland can do better than this.