Centre in Clonskeagh is major symbol of Islam in Ireland 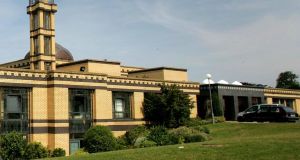 The Islamic Cultural Centre (ICCI) at Clonskeagh in south Co Dublin has tended to be the major symbol of Islam in Ireland. Belonging to the majority Sunni Muslim tradition, it is there to which official Ireland turns when it wishes to acknowledge and/or welcome the State’s growing Muslim community.

It was there Leo Varadkar went last June, shortly after his election as Taoiseach, to mark the end of Ramadan, the Islamic month of fasting.

President Michael D Higgins, on his second visit there in November 2016 to mark the centre’s 20th anniversary, thanked the Muslim community “for the important role you have played throughout those two decades in enabling Ireland’s Islamic community to become fully engaged, and active members of their wider social and national community”.

Also at 20th anniversary events there, Mirza Al-Sayeg, vice-president of the Al Maktoum Foundation which built and funds the ICCI, recalled warmly a visit by former president Mary McAleese. In attendance with him and representing Sheikh Hamdan Bin Rashid Al Maktoum, Crown Prince of Dubai in the United Arab Emirates, was Alsayed Ali Al-Hashim.

Then too Minister of State for Integration David Stanton praised the centre for exploring “new ways to embed a culture of respect for diversity” in Ireland.

The centre itself was opened in November 1996 by former president Mary Robinson, an event which attracted particular coverage because Yussuf Islam, formerly known as singer Cat Stevens, also attended.

For good reason then Al-Sayegh cast his mind back two decades with obvious satisfaction. He recalled how the genesis of the centre came about in 1990, eight years after Sheikh Hamdan bin Rashid Al Maktoum of the United Arab Emirates had established his family’s first stud farm at Maynooth.

The ICCI at Clonskeagh is the busiest Islamic centre in Ireland, with a staff of about 20

“We [and others] sat together to talk about establishing such a place. Authorities in Dublin and Maynooth were so co-operative and so helpful, leaving no stone unturned in making this place a reality,” he said.

Funded by the al-Maktoums, the 5,000sq m centre, one of the largest in Europe, cost IR£5 million to build in 1996 and contains a main mosque that holds more than 1,700 people as well as two smaller prayer halls.

In addition, it has a Muslim national school, a sports hall, a library, an exhibition hall, an information centre, offices, a women’s education and social centre, a shop, a restaurant, eight apartments and a mortuary.

Designed by architects Michael Collins & Associates, it won a Royal Institute of the Architects of Ireland award in 1997. Set on 3.5 acres, it was Ireland’s second purpose-built mosque, after one built in Ballyhaunis, Co Mayo in 1987.

The ICCI at Clonskeagh is the busiest Islamic centre in Ireland, with a staff of about 20. Each day, about 1,200 people come there for prayers; 850 children attend its Quranic school and there are 250 in its primary school.

Its Imam is Sheikh Hussein Halawa (61) who came to Ireland from Egypt in 1995. He studied theology at Cairo’s Al-Azhar University and gained his doctorate in Islamic studies at the International Islamic University in Pakistan’s Islamabad. His son Ibrahim was released from jail in Egypt last October after being held there, untried, for more than four years

Imam Halawa is chairman of the Irish Council of Imams, which was set up in 2006 to represent the Muslim voice in Ireland, frequently meeting with politicians and other church leaders.

A controversial theologian and scholar firmly traditional in his beliefs, Sheikh al-Qaradawi was banned from the US in 1999, the UK and Ireland in 2008, and France in 2012

He is also the Muslim leader most invited to take part in State occasions whether it be the inauguration of presidents, national days of commemoration or other State gatherings.

He is secretary general of a theological body of Muslim scholars, the Dublin-based European Council for Fatwa and Research.

Its president, Egyptian-born but Qatar-based Yusuf al-Qaradawi (91) is, it is claimed, a member of the Muslim Brotherhood. He has denied this.

A controversial theologian and scholar firmly traditional in his beliefs, Sheikh al-Qaradawi was banned from the US in 1999, the UK and Ireland in 2008, and France in 2012.

This centred on a belief that he condoned Palestinian suicide bombings against Israelis; that he was anti-Semitic and homophobic. However, he also condemned the 9/11 attacks on New York and supported Muslim integration in Western societies.

He visited Ireland many times but was banned in 2008. It was suggested by US officials, in correspondence dating from 2006 released by WikiLeaks, that Imam Halawa himself was a member of the Muslim Brotherhood. This has also been denied.

His daughter Somaia Halawa has said there were no overt links between her family and the Muslim Brotherhood but that she had friends who were members. Her family was “not political in that way”, she said.

However, Soha Gendi, Egyptian ambassador to Ireland, has been adamant in the past that “the whole family is part of the Muslim Brotherhood, whether they deny it or not”.

Founded in Egypt in 1928, the Muslim Brotherhood is a Sunni Muslim organisation set up with the aim of establishing the Koran as sole reference point for ordering life in the family, community and State.

It was outlawed in Egypt until the so-called Arab Spring of 2011 and the removal of then prime minister Hosni Mubarak. It was outlawed again by the current Egyptian regime in September 2013.

In 2015 the Muslin Brotherhood was designated a terrorist organisation in Bahrain, Egypt, Russia, Syria, Saudi Arabia and, significantly where the ICCI is concerned, the United Arab Emirates.