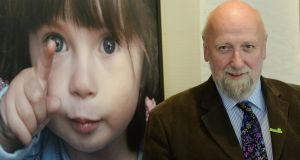 Fergus Finlay at the launch of the annual Barnardos report. He is retiring as its chief executive after 13 years. Photograph: Cyril Byrne

The situation of children in Ireland is worse today that it was in 2005, Barnardos chief executive Fergus Finlay has said.

“Somehow it has, and it has happened on the back to an economic recovery. It’s bizarre at one level, and shaming at another level. That’s what we’ve become.”

Mr Finlay is standing down as chief executive of the children’s charity after 13 years, and on Tuesday it published its annual report in Dublin.

“I’m very, very proud of what Barnardos is and what it has become. We are the best at what we do. I work with 400 people who are simply the best I’ve ever worked with.”

However, he added: “I’m also really, really ashamed of where Ireland is in relation to kids.”

Mr Finlay said children “barely feature in public policy”, and “the figures remain exactly the same as they always were”, with 11 per cent of children living in consistent poverty.

Things would only change “when we have a really honest debate about how we spend money in Ireland”.

For instance, in the budget next month the Minister for Finance “should take his courage in his hands and say no fiver a week for pensioners, no tax cuts”, and spend money instead on children.

“We’re breeding kids to put them in jail. One of the statistics that drives me nuts…I know from our work it costs about €6,000 a year for two years to give a child a really good start in education. It costs about €100,000 a year to keep an 18-year-old in Mountjoy jail.

“If you give the child a good start you radically reduce the chances of them becoming that adult that’s going to end up in Mountjoy jail. We won’t do it. They let charities do it, and they fund a bit of it.”

He said where childcare in general was concerned, “we run the maddest system in the world. We invented overnight a system of childcare which had a single purpose – to enable women to get back to work.”

Regarding his future, Mr Finlay said “the presidency is closed off” but “there’s a lot of things I care passionately about, particularly in disabilities”.

He has been reappointed to the board of the Charities Regulatory Authority, and said he had “no intention of retiring, and my wife has no intention of letting me retire”.

Mr Finlay said he did not have plans to try to rescue the Labour Party, in which he served as an adviser to then leader Dick Spring in the 1990s.

“I think a lot of mistakes have been made” but it was “going to take somebody younger and a lot more energetic and probably with a lot more hair than me to do the things that need to be done”.