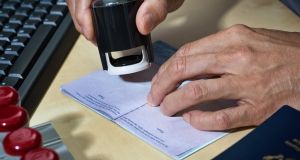 A lack of awareness among employers and recruiters and long delays in visa registrations are preventing thousands of non-EU trained professionals from securing employment in Ireland, a new campaign has said.

The Reform Stamp 3 campaign, which represents the partners and spouses of people who come to Ireland on “critical skills” and “general work” permits, has called on the Government to educate employers so they understand that Stamp 3 holders are legally entitled to apply for work.

The group has also requested a clearer explanation of the rights of visa holders to be provided on Government websites.

The Stamp 3 permit is given to non-EU nationals who join their non-EU spouse or partner legally working in Ireland. It does not allow holders to enter the labour marker but does allow them to apply for work. If offered a job they can apply for a Stamp 1 work permit. However, many employers believe Stamp 3 holders cannot apply for work, the group says.

Ireland is one of the only countries in the EU which does not allow spouses or partners of highly-skilled workers to have direct access to employment and self-employment.

Nadia Bocharskaia, a museum curator from Saint Petersburg, moved to Ireland nearly three years ago with her husband and daughter. “My husband is a data engineer and we were offered the chance to go to Ireland or Canada, so we picked Ireland. We were assured I would be able to work here but we’ve faced barrier after barrier. Employers won’t even consider me for an interview.”

Ms Bocharskaia volunteered for two years in a museum and took night classes in Trinity College and University College Dublin to upskill while job searching but has been told at every interview she must have a different visa or a European passport.

“All the women in my family had a career and contributed to the family income – my mum was a doctor and my grandmother was a biology teacher. We planned our life in Ireland keeping in mind that we would have two working professionals in the family. I feel worthless, isolated and powerless. I cannot integrate as I cannot work.”

The barriers preventing spouses and partners from securing work is also blocking families from fully integrating into their local communities, warned the campaign.

Nahla Bastawi, a pharmaceutical marketing specialist from Egypt who moved to Ireland with her husband, says constant rejection by employers leads to feelings of hopelessness and anxiety. “It makes me feel like I am stuck somewhere between supporting my husband and letting go of my own personal dream. I want to work and pay my share of taxes. How can I integrate when I don’t feel like I’m a contributing part of this community?”