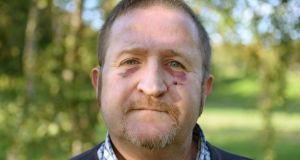 Marc Power: ‘I’ve no issues with my sexuality; other people do.’ Photograph: Dara Mac Dónaill

A middle-aged man was attacked in a suspected homophobic assault by a group of youths in north Dublin, who beat him with weapons while calling him a “f****t” and laughing.

Marc Power, from Coolock, north Dublin, was lured to the assault on Tuesday night by what he believes to have been a fake profile on the gay dating app Grindr.

He was attacked while sitting in his car at the arranged meeting spot outside the Odeon Cinema in Coolock by a group of at least four young men. The youths were carrying weapons including hammers and called him a “f****t” and a “pervert” during the assault, he said.

The attack took place at about 10.30pm, according to a Garda spokesman who said officers were investigating the matter and no arrests had been made.

Mr Power is in his early 50s and had agreed to meet what he believed to be another man for a date.

He said that while driving down to the cinema he received a message from the Grindr account asking him to instead meet in a poorly lit secluded park beside the cinema.

He said he refused and continued on to the carpark, where his car was set upon several minutes later.

“I pulled into a spot, then a group of teenagers seemed to come out of a bush and rushed towards the car. They started punching me in the face, one must have been wearing a ring on his finger as I started bleeding everywhere,” he said.

The attackers had pulled his car door open and were attempting to drag him out of the car while punching his face and legs, he said.

“They started calling me a f****t, calling me a paedophile, a pervert. They were all laughing, that was one of the scariest things about it. Right away they were trying to get me in the head,” he said.

“I just was convinced they were trying to kill me . . . This was attempted murder,” he said.

Trying to defend himself he started kicking his legs at the youths while still in the car.

“I was terrified one of the lads would come around and open the car door on the other side,” he said.

“They kept hitting me on the legs with whatever they had. I stuck my hand on the horn and left it there and started screaming for help.”

Bystanders began to notice the attack and shortly afterwards the attackers fled the area.

“I was in a bad state. People were very helpful,” Mr Power said.

The attackers had also damaged his car and smashed his windshield with the weapons. He was taken to Beaumont Hospital, where he received treatment for injuries to his head, which required several stitches.

Gardaí arrived at the scene about 10 minutes after the attack, Mr Power said. After speaking to the responding officers he was given an appointment for Wednesday next week to give a full statement.

“I don’t have the greatest faith in the guards,” he said, adding he would have thought the investigation would have been undertaken with more urgency.

“I have experienced homophobia before. I’ve had people making snide comments. It’s always been there in one form or another,” he said.

“I’ve lived abroad most of my life and never had any problems. Back in Ireland I’ve had about three incidents. It makes me think about my own home city, and has it changed much. I’ve no issues with my sexuality; other people do.”

Mr Power, who described himself as a very private person, said the reason he wanted to speak about his attack was to try to prevent something similar happening to someone else. It would be ridiculous to treat his assault as anything other than a homophobic attack, he said.

The experience meant he would be “more wary” about meeting up with people in the future, but he insisted he would not allow the assault to “change who I am”.

Aodhán Ó Ríordáin, a Labour Party Senator based in north Dublin, said the attack was “disgusting and deeply concerning”. Mr Ó Ríordáin noted the assault took place not far from where another gay man, Declan Flynn, was kicked and beaten to death in Fairview Park in 1982.

LGBTQ+ organisations and campaigners have called for hate crime legislation to be introduced in Ireland for attacks motivated by homophobia or racism.

A spokesman for the Department of Justice said research was being undertaken to look at how other countries had legislated for hate crimes.

“This work is due for completion before the end of 2019 and will inform the development of Ireland’s policy and legislative response to this issue, building on international best practice,” the spokesman said.

A Garda spokesman said investigations were ongoing. A spokesman for Grindr said they were “heartbroken” to hear of the incident.

“We take a number of measures to protect our community, including . . . providing a safety guide to assist users when interacting with others online,” he said.

“We consistently look for ways to strengthen how we protect our users.”