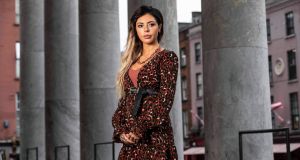 Amy Dunne: ‘I’m not ashamed any more. Everyone should make their own decision.’

The woman at the centre of the controversial Miss D case in 2007 has revealed that she was told by social workers at the time that getting an abortion was murder and that she was advised to stay in a mental hospital.

Amy Dunne, who is now aged 29, is the subject of a documentary which will be broadcast on TG4 on Wednesday.

She told RTÉ radio’s Today with Sean O’Rourke show she was warned that if she attempted to travel to the UK for an abortion she would be charged with murder and that anyone who accompanied her would be charged as an accomplice.

Ms Dunne explained how she became pregnant at the age of 16 and on her 17th birthday had a scan which revealed her baby had anencephaly. She said she spoke to social workers (as she was in temporary foster care at the time) seeking support, “then I was in the High Court. ”

The protests outside the court at the time were “very disturbing” and to this day she finds it very distressing when she sees protests.

She became involved in the Repeal the 8th campaign and admitted that conducting interviews became difficult. “I started to take it very personal. It got just too much for me.

“Repeal changed my life. I’m not ashamed any more. Everyone should make their own decision.”

Ms Dunne explained that she participated in the documentary so she would “get to tell what really happened, in my words, so I would heal.”

She added that she supports calls for exclusion zones outside hospitals providing abortion services. “I don’t think any one should be allowed protest outside a hospital.”

‘Thrown to the wolves’

Making the decision to have an abortion was a very personal and difficult choice, and then having to face protests outside a hospital made a difficult situation even worse, she said. Such protests were “absolutely ridiculous.

“Pro life people should be ashamed of themselves. I think it’s sick... We all make decisions and they’re not made lightly.”

She also recalled an incident in 2007 during the High Court case when an elderly man attempted to pray over her while calling her a murderer.

Ms Dunne told of the treatment she received in hospital in Liverpool where she opted for an inducement so she could give birth. She went through 16 hours of labour in the hope that her baby would “take breath” unaware that the baby was already dead.

She praised the nurses who cared for her, saying they treated her with great compassion and support. On her return to Ireland she felt like she had been “thrown to the wolves. Everybody else went back to their lives.”

Within two months she was pregnant again, unintentionally, but she said she was still hounded by newspapers and friends sold photographs of her.

Although she was not identified, she said that she lives in a small town “everyone knew who I was. I remember standing in Pennys and young girls were whispering saying I was Miss D.”

Her baby was born healthy and her son is now “thriving” and unaware of what happened to her.