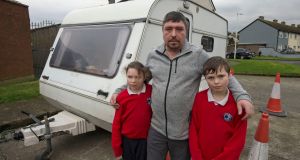 James Douglas, who lives in a caravan on the side of the road in the Rathsallagh Park area of Shankill, and his children Skye (9) and Kealum (10). Photograph: Dave Meehan

A south Dublin man who has been living in a caravan for more than three years fears returning to a tent following an eviction notice from the local authority.

James Douglas (39) said he might lose contact with his children if he could not get alternative accommodation. He became homeless four years ago after his marriage broke down.

“I was in a tent for six months first. Then friends and family got together and got me a caravan.” Since then he has been staying on a green area at the back of Rathsallagh Park housing estate in Shankill, south Co Dublin.

Towards the end of last summer, however, that van was seized by Dún Laoghaire-Rathdown County Council while he was dropping his children to school.

“All my grandparents’ things I had, my children’s clothes,they took them.” He slept again in a tent for six weeks until, again with help, he got a caravan three months ago.

It has just one “room” with two seating areas that pull out as beds. It has a two-ring hob, a sink and a cabinet-sized room with a toilet. “You have to empty the toilet, so I don’t use it,” he said. “I go into a neighbour’s for that, and to wash.” There is no heating, the windows are single-glazed plastic and a hole in the floor is stuffed with cushions.

As his youngest children, Kealum (10) and Skye (9), eat soup at one table, the van is very cold. He sleeps with “four or five quilts”.

On February 11th he returned to find a notice from the council taped to his door, telling him the caravan was “an obstruction” and giving him 24 hours’ notice to remove it “to at least a distance of one mile” from its current position. The council would remove it if Mr Douglas did not comply, it says.

He has moved it across the road to a nearby parking space.

“I’m waiting for the council to come and take this one now. I’m an emotional wreck,” he says becoming upset. “It feels like the harder you try the harder they make it.”

He is to meet council officials on Monday but is not optimistic.

Though approved for the Housing Assistance Payment, he hasn’t been able to find rental accommodation. “The landlords won’t take HAP.”

As a recovering alcoholic, he says he cannot go into a homeless hostel, where drugs may be used. In addition he had a stroke last year and fears his “heavy medication” could be stolen.

Local councillor Hugh Lewis of People Before Profit said Mr Douglas “should not be made homeless” until “somewhere else that meets his needs” is found.

Mr Douglas said he he needed to stay in the area. “If I don’t take the kids after school their mother will have to give up work. Their after-school clubs are here.”

A neighbour, who gave his name as Gary, described the council’s threat to seize the van as a “disgrace”. “He’s a good friend,” he added. “He isn’t doing anyone any harm here.”

She added: “Every effort is made to source emergency accommodation for any person who requires it. In addition the council provides a place-finder’s service to assist people ... to exit homelessness.”