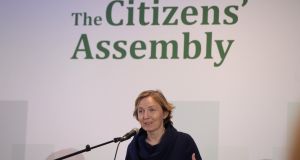 The constitution is a barrier to the proper recognition of same-sex families, the Citizens’ Assembly heard on Sunday.

Paula Fagan and her partner Denise have two boys, aged 10 and 13, and they have been together 15 years.

Ms Fagan, who is also the chief executive of LGBT Ireland, said every time the boys’ passports come up for renewal, they, as parents, have to swear that they are lone parents despite being together since the children were born.

Ms Fagan told the assembly it was not the gender of the parents or the number of parents that matter, but the “love, commitment and care” that children receive.

She said they had legal guardianship, but that guardianship runs out when their sons are 18 and thereafter “my sons become strangers to me when they turn 18.

“As a parent, you are a parent to your child all of your life. The constitution is a barrier to recognising our family and thousands of families like that,” she told the assembly.

“Once there is a donor involved, it is a problem as far as the family is concerned. We ask you to recognise and protect our family by broadening the definition of family.”

She said the law needs to be changed to “recognise diverse family forms” and “evolving reproduction technologies. The constitution needs to protect and defend what matters in the family.

“In the case of children being raised by same-sex parents, putting the children at the centre of law reform is what matters.”

Single mother Adele O’Connor told the assembly she has a 25-year-old daughter who was born when she was 22, but the relationship with the father of her child broke down.

“Because I choose not to marry, does that make me and my child not a family?” she suggested.

“Surely the question should be, ‘what is the fundamental rights of every Irish citizen?’”

Separated father David Saunders, who became a father at 18, said in many sectors of society “fathers are the forgotten part of the family” and are characterised as “dead-beat Dads”.

“Nothing could be further from the truth,” he said.

Mr Saunders, the founder of the Lads to Dads group for young or expectant fathers, said he moved out of the family home when his children were 12 and four.

He suggested that society needs to do more to support fathers who “want to be good Dads” and there should be clarity around guardianship and proper mediation to reduce the number of families through the courts process.

“Fathers want to be good dads and support their children, but we need some help sometime,” he said.

He proposed a fathers’ network which would help other fathers through the process of family break-up.