Magdalene survivor: ‘It feels like Ireland is abusing us again’

Elizabeth Coppin (70) says her treatment by State has been cruel, inhuman and degrading 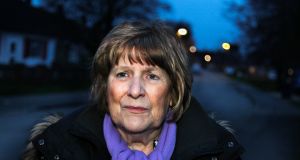 Elizabeth Coppin, at her home in England. ‘Ireland has never acknowledged the truth of what happened in the laundries.’ Photograph: Joanne O’Brien

Elizabeth Coppin (70) feels “very bitter” towards the Catholic Church but “much worse towards the Irish State”.

“They failed to protect me and thousands of other women like me,” she says, “and they’re still bullying us.”

The survivor of three Magdalene laundries, where she says she endured extreme physical and psychological abuse for 16 years, has been seeking justice from official Ireland for more than 20 years. Having exhausted all avenues – including the gardaí, the courts, redress bodies and an appeal to a government minister – she is now taking her case to the United Nations.

The UN Committee Against Torture, which has deemed her case admissible, has given the State until May 20th to respond. It is a landmark case, being the first before the committee from a Magdalene survivor. It challenges how the State engages with these women.

Ms Coppin is not asking the Geneva-based committee to decide whether she experienced “torture and other cruel, inhuman or degrading treatment or punishment” in the laundries – this is a given she says.

She argues the ongoing failure of the State to properly investigate the human rights abuses perpetrated on the women; to instigate criminal proceedings against the perpetrators; to open up records which could elucidate why or how the abuses happened, or, even to acknowledge that the women’s human rights were violated, constitutes ongoing cruel, inhuman and degrading treatment by the State.

Ms Coppin’s 19-page statement to the committee, seen by The Irish Times, sets out over nine pages the abuses she says she suffered in her youth. The pages after that list her attempts to report the abuses and have them investigated.

She was born Elizabeth Riordan to an unmarried 19-year-old woman, in a mother and baby home in Killarney on May 21st, 1949. Her grandfather paid the nuns £100 to get his daughter out and bring her home to Gurteen, Listowel.

She was committed by the courts to Pembroke Alms industrial school for girls in Tralee, run by the Sisters of Mercy in August 1951. She was aged two.

“I was subjected to horrific emotional and physical abuse there by the nun in charge,” she says. She was beaten, starved and at one point tried to kill herself by “setting herself on fire”, she says.

On March 19th, 1964 she was transferred to another Magdalene laundry in Cork, perhaps the worst day of her youth, she says. Speaking from her home in Cambridgeshire, England, she says she had always been told in the school there was somewhere worse. “It was a terrible shock” to realise she was being sent there. “I was so scared. I had been always with children and babies. Seeing all these old women and hearing them crying out at night was terrifying.”

The work was “exhausting”. The women were not allowed to speak to each other. They slept in “cells” locked from the outside. “I was in perpetual fear,” she says.

She says the Good Shepherd laundry in Cork, to which she was transferred in 1966, was worse and that her hair was shorn and her name changed to Enda. In March 1967 she was moved to St Mary’s Magdalene laundry in Waterford, where she was happier. She left in April 1968, got a job in Dublin and in February 1969 “had saved enough” to go to England.

She married Peter Coppin in 1973, had two children, and qualified as a school teacher. However she says she “suffered from profound depression and anxiety” and had nightmares about being back in the laundries. Having reconnected with her birth family in the 1980s she realised how much she had lost and in October 1997 “decided to report what had happened [to her]” to the gardaí. Her statement was not followed up on, she says.

Further efforts to make the religious accountable were unsuccessful, while the State’s response has been to “dangle money and hope we’d go away”, she says.

She remains “haunted” she says by the lack of information about what was done to her, why and by whom.

“Ireland has never acknowledged the truth of what happened in the laundries. In my position you’re very dependent on the State to see you right, but it feels like all Ireland is doing is abusing us again. I’m hoping the UN will condemn Ireland for what they’re still doing to us.”

In a statement, the Sisters of Mercy said: “Such matters have been examined by the state authorities, who have had our fullest co-operation. We have nothing further to add”The Good Shepherd Sisters did not respond to a request for a comment.