Country kept traditional family structure for much longer than other countries, meeting told 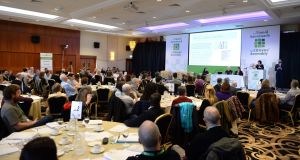 Ireland has an “incredibly low” divorce rate and one of the highest birth rates in Europe, the Citizens’ Assembly on gender equality has been told.

She said Ireland’s birth rate remains high by European standards but has fallen off dramatically since the 1970s.

In that decade the average mother had four children; today is less than two per mother.

Irish mothers at an average age of 33 are also older than their European peers.

Professor Connolly said Ireland was regarded as a country that kept the traditional family structure for much longer than other countries especially as divorce was only legalised in Ireland in 1995.

However, patterns of family formation in Ireland are converging with the European norm with approximately 40 per cent of children being born outside marriage which is higher than the European average.

In other respects Ireland remains an outlier in terms of the level of divorce and the high birth rate, she stressed.

She told the assembly that women are overwhelmingly the ones in one-parent families. Some 91 per cent of lone-parents in Ireland were women according to the 2016 census and 98 per cent of recipients of the one-family payment in 2016 were women.

She said the Irish State from the beginning sought to protect the “traditional family” as being married heterosexual parents with children though Ireland also had very high levels of men and women in the past who never married.

“We are looking at a category which is constantly subject to change and evolving,” she stated.

Professor Siobhan Mullally of NUI Galway said the Constitutional Convention in 2013, the UN Committee on the Elimination of Discrimination against Women and the Irish Human Rights and Equality Commission have all recommend that Article 41.2 which states that women have a special place in the home should not be retained.

There were three recommendations made by a task force report from the Conventional Constitution.

One was simply to delete Article 41.2, the second was to replace it with a clause stating that the State “shall endeavour to ensure that persons caring for others” are supported by society.

An alternative wording would see the State “support persons caring for others within the home”.

1 Coronavirus: Government to extend restrictions for at least two weeks
2 Growing hope in Government of partial easing of restrictions after May bank holiday
3 Coronavirus: Ireland will have to ‘live alongside the virus’
4 Chief medical officer urges people not to visit hardware stores
5 Coronavirus: New York reports new high for deaths as cases soar
Real news has value SUBSCRIBE