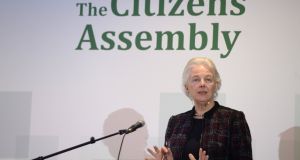 Members of the Citizens’ Assembly have overwhelmingly backed a call for the controversial “women in the home” article in the constitution to be deleted and/or replaced.

The 99 members of the assembly and its chair Catherine Day were asked for their verdict on the deliberations of the Constitutional Convention in 2015 which mandated the Government to seek a referendum on same-sex marriage which was duly passed by the electorate.

The convention was also asked if Articles 41.2.1 and 2 should be removed from Bunreacht na hÉireann. Article 41.2.1 states: “In particular, the State recognises that by her life within the home, woman gives to the State a support without which the common good cannot be achieved.”.

Article 41.2.2 states: “The State shall, therefore, endeavour to ensure that mothers shall not be obliged by economic necessity to engage in labour to the neglect of their duties in the home.”

At the convention 88 per cent favoured deletion of these clauses, but 98 per cent stated that they should be replaced by a gender-neutral text to include other carers in the home. A majority (62 per cent) believed the replacement constitutional cause should also include carers outside the home. They also held that carers, should not as a result of economic necessity, have to work outside the home.

The members of the assembly were asked to discuss if Articles 41.1.2 and 41.1.3 should be deleted or replaced and if replaced, what should they be replaced with?

In a round table discussion afterwards, the assembly, discussing gender equality, endorsed the findings of the Constitutional Convention that the two articles should be deleted, but called for clarity on how it should be implemented.

Some of the convenors of the tables stated Articles 41.1.1 and 2 should be retained with a gender neutral clause.

Other said the State must define a “reasonable level of support” for carers or guardians as opposed to “shall support”, alternative phrases which were considered by the Constitutional Conventional.

There was disagreements among some of the citizens as to how much financial support the State should provide carers.

Some queried about what “caring beyond the home” might mean if that clause was inserted into the constitution and what it would mean financially.

There were several requests for further clarity on it. Another table of citizens said the level of support required to carers beyond the home through a constitutional change would be more “aspirational than achievable”.

Others said the “common good” needed to be defined.

“We felt legal assistance in deciphering the language we are being asked to define and understand would be a benefit going forward,” one moderator said.

One table recommended that the word “mothers” be replaced with the word “guardians”.

The moderator of another table suggested that there should be a payment for stay at home mothers and this should be done by a “minimum threshold” payment which would be means-tested.

Ms Day said their deliberations would feed into the next meeting of the assembly in March.