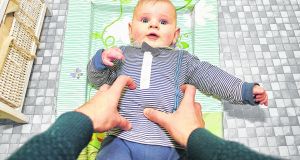 Almost half of fathers entitled to paternity benefit in 2018 did not take it according to new data released by the Central Statistics Office.

In its first release on the topic, the agency also found that the following year, the rate of paternity benefit was just less than 60 per cent that of maternity benefit.

In sectoral terms, the highest rate of paternity benefit in 2019 was amongst employees in public administration roles and in defence. The lowest rate was in the accommodation and food services industries.

The rates were highest in large enterprises with 250 or more employees.

However, overall just 45 per cent of entitled fathers took advantage of the support in 2018.

“This is the first CSO release to examine employment data of people who received maternity and paternity benefits and is an example of policy-relevant research projects the CSO are developing,” said statistician Dermot Kinane.

In regards to maternity, the data shows one in ten women who received benefit did not return to work in 2019, while overall there has been a modest decline among recipients, from 5.8 per cent in 2016 to 5.3 per cent last year.

Over half (54 per cent) of women in receipt of maternity benefit in 2019 received a top-up payment from their employer.

Similarly to men, the public administration and defence sectors had the highest rate of maternity benefit at 8.3 per 100 employees in 2019, while the lowest rate was in accommodation and food services, at just 2.5 per 100 employees.

Rates were also highest in large enterprises with 250 or more employees.

“The likelihood of a woman returning to paid employment drops with each additional child, particularly for those who have had four or more children,” said Mr Kinane.

“The first year of a child’s life is one of the most important in terms of the child building a relationship and a bond with both parents,” he said.