Welfare system and economy must be ‘re-imagined with a feminist agenda’, seminar told 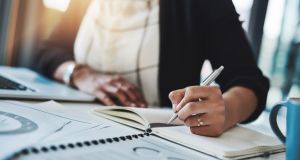 The continued exclusion of women returning to work after maternity leave, from the Government’s temporary wage subsidy scheme, could put Ireland in breach of European law, human rights watchdog IHREC has warned.

The Irish Human Rights and Equality Commission has written to Minister for Public Expenditure Pascal Donohoe expressing its “concern” that the scheme gives “less favourable treatment” to these women than other workers.

Acting chief commissioner, Frank Conaty said the commission had examined the legality of the scheme “and found there is a strong argument the exclusion of women returning from maternity leave from the scheme is discriminatory under EU Law.”

The Covid-19 Temporary Wage Subsidy Scheme subsidises the pay of workers in companies where the pandemic has caused loss of turnover of at least 25 per cent.

Women returning from maternity leave where the employer did not ’top-up’ the statutory rate, and who were not on the payroll in January and February, are unable to access the subsidy. On Thursday Minister Donohoe told the Dáil he would bring a proposal to cabinet on Friday to address it.

The whole welfare system, and the economy, must be “re-imagined with a feminist agenda” after the pandemic, a webinar hosted by the National Women’s Council of Ireland (NWCI) heard on Thursday.

The second in a series of NWCI webinars on Covid-19, it heard calls for the incomes of top earners to be reduced by 20 per cent, and for this to be used to better-pay essential workers.

Speaker Ebun Joseph, member of the social justice faculty at UCD, said the pandemic had “redefined what we call essential workers [and they include] carers, cleaners, Tesco workers”.

Women must “demand pay transparency” she said and “women’s work must be revalued”.

Dr Mary Murphy, associate professor at the social science institute in Maynooth University, said the crisis had exposed “the absence of [adequate public] care and public services…That is not an accident. That is a direct outcome from Ireland’s political economy model”.

While 1.2 million people were in receipt of the pandemic unemployment payment or wage subsidy scheme, when other adults like lone parents, carers and others reliant on welfare were included, that figure was 1.8 million, said Dr Murphy.

“They are the women who are not being discussed,” she said and they must be in discussions about a feminist post-Covid society.

She called for high quality “universal basic services” complemented by a “universal participatory income” for all adults.

“I do believe that quality public services and a decent participation income would give us the floor from which we could all participate in the labour market and combine work with care in ways that suit us over our life cycles.”

Diane Elson, Professor Emerita of Sociology at the University of Essex, said she was “really worried” gender equality may be “set back” after the crisis as women had taken on the majority of additional unpaid care work, such as home-schooling, during it.

Many of the jobs in tourism and hospitality - predominantly held by women - would not return. Government must invest in more and better public service jobs.

“We need to make care jobs much better. We need to raise the pay in the jobs where women are concentrated.” This could be afforded through borrowing and higher taxes. The return would be on better services and more women in well-paid jobs.