Working in childcare: ‘At the end of the day I can’t pay my bills’

90% of childcare workers questioning their future in sector over low wages, survey shows 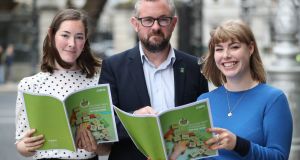 Amy Greer Murphy (L), Darragh O’Connor and Eva Lawless at Buswells hotel in Dublin, with their Early Years survey results showing that some 90% of educators are questioning their future in childcare. Photograph: Niall Carson/PA Wire

A manager at a north Dublin Montessori has said she is working two jobs in order to pay her bills.

Eva Lawes (29), deputy manager at a Montessori and after school facility in Donneycarney, said trying to pay a mortgage on a childcare worker’s wage is “beyond difficult” and she will have to leave the sector if pay and conditions don’t change.

“I manage the facility I’m in at the moment but I’m also training to be a florist and working as a trainee florist on my days off,” she said.

“I absolutely love what I do, if I could continue to do it I would . . .there’s huge rewards and huge joy to get out of it but at the end of the day I can’t pay my bills.”

A newly released survey of childcare workers has found 90 per cent of participants are questioning their future in the sector with low rates of pay the main issue.

The survey was carried out last June by social scientist Dr Amy Murphy as part of Siptu’s Big Start campaign, which is calling on the Department of Children and Youth Affairs to reform the early childhood education and care sector.

On Friday, the department published new figures showing wages for workers in childcare remain among the lowest earned in any sector.

Ms Lawes, who has been working in the sector for 10 years, studied part-time as well as working in order to obtain a level six Montessori qualification, which resulted in a €1 wage increase (per hour).

“My boss can’t pay me any more, she sometimes isn’t taking a wage some weeks because she’s not getting money in so it’s not the provider’s fault either and it’s not parents’ fault because they’re crippled with the cost as well,” she added.

“The whole system is just wrong, it’s not working for parents, providers or staff... As a sector we’re not taken seriously. We are, in my experience, seen as glorified babysitters and many people are totally unaware of the day to day pressures of working in childcare.”

“We gathered responses from workers all around the country who stated overwhelmingly that they felt undervalued and underpaid,” she said.

“This indicates the need for Government to engage with employees in the sector to ensure their working conditions are improved and to guarantee the children in their care get the best experience possible.”

Darragh O’Connor, Siptu’s head of organising and campaigns said early years educators are saying, “they will have to leave their jobs if conditions do not change”.

“In response the Siptu Big Start campaign is calling on the Department of Children and Youth Affairs to reform the Early Childhood Education and Care sector. The first step is for the Government to invest in the sector by ensuring the minimum rate of pay for workers is the living wage,” he said.