‘Sex for rent’ propositions to vulnerable tenants ‘not unusual’ 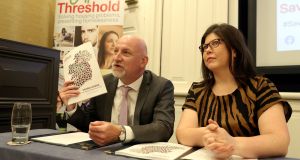 The issue of vulnerable tenants being propositioned with “sex for rent” arrangements is “not unusual”, according to housing charity Threshold.

The Dáil heard claims on Wednesday that unscrupulous landlords were seeking sex from vulnerable tenants in lieu of rent.

Solidarity TD Ruth Coppinger highlighted the case of a young woman in Rathmines in Dublin who was offered free rent by her landlord “if we agree something”.

Threshold policy officer Ann-Marie O’Reilly, speaking as the group presented its pre-budget statement in Dublin on Thursday, said the case was not “a once-off”.

“This is something I was discussing with our advisers last week,” she said. “Unwanted approaches from landlords is something that does come up from time to time. It’s something we’re going to be looking at in more detail going forward. Unfortunately it’s not a once off, or unusual.”

This is the rental sector in 2019 such is the power landlords have. Here are the original messages that I read from in the Dáil.#SexIsNotRent #dubw #metoo pic.twitter.com/zAIdmU6BW9

In its pre-budget statement, the charity called for an increase in the Housing Assistance Payment (Hap) caps provided to those seeking to secure a home in the private rented sector. It said rents in many areas were far higher than the Hap payment.

“This means families either devote almost all of their disposable income to topping up Hap just to pay the rent, or else just can’t pay the rent and enter homelessness”, said Threshold chairwoman Aideen Hayden.

“While the efforts to support the 10,000-plus people currently registered as homeless in Ireland are important, they are only part of the story. Prevention is the solution.”

Threshold chief executive John-Mark McCafferty said it was much more economical to spend money on homeless prevention than homeless accommodation.

“Of course the benefits of homelessness prevention must not be measured by a simple financial cost/benefit analysis.

“Homeless prevention is a moral, social and fiscal imperative, benefitting the health, well being and future prospects of children, parents, couples and single people who remain in their homes.”

Other proposals put forward by Threshold include the introduction of a deposit protection scheme, whereby renters’ deposits would be protected from unscrupulous activity or illegal retention by landlords.

It also called for more homes to be made available on a cost-rental basis with rents set according to ability to pay; an NCT for housing to improve standards; tax incentivisation of long-term leases; and the outlawing of “no reason” evictions.