Thinking Anew – The way we do business matters 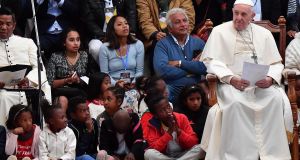 Pope Francis in Akamasoa in Madagascar this month. Referring to multinational companies and their exploitation of the environment, he said that governments and citizens must beware of “a tendency toward plundering and pillaging driven by a greed generally not cultivated by the inhabitants of these lands, nor motivated by the common good of your people”. Photograph: Luca Zennaro/EPA

‘I tell you, make friends for yourselves by means of dishonest wealth so that when it is gone, they may welcome you into the eternal homes.” According to tomorrow’s gospel reading this is what Jesus told his followers. However, the idea that we should make friends “by means of dishonest wealth” does not sit easily with his other teachings as we understand them. Nonetheless this reading reminds us that Jesus was not some out-of-touch dreamer but rather someone who understood the kind of world we live in and the pressures ordinary people must contend with. He is aware that the “business is business” attitude to life can be both testing and even dishonest at times.

The reading includes a parable which tells how a dishonourable manager is accused of squandering his master’s wealth and in an effort to redeem himself offers discounted deals to his boss’s debtors and thereby redeems himself. There are aspects of this story that resonate with life today: a manager who is dishonest and not up to the job; in an effort to save his own skin he implicates those under him because the deal was too good to refuse. And who could blame them, especially if they were not well off.

But the way we do business matters, a point underlined by Pope Francis on his recent visit to sub-Saharan Africa. In Madagascar he condemned “a clan culture of privilege and corruption that allows a very few to live in wealth while the vast majority languish in grinding poverty”. Referring to multinational companies and their exploitation of the environment, he said that governments and citizens must beware of “a tendency toward plundering and pillaging driven by a greed generally not cultivated by the inhabitants of these lands, nor motivated by the common good of your people”.

Madagascar is one of the poorest countries in the world, and the UN World Food Programme estimates that more than 90 per cent of its people live on less than €2 a day, with chronic child malnutrition widespread. According to Transparency International corruption is rampant among the country’s political and business class.

Jesus did not object to people enjoying life; in fact, we know he dined out with important people and had wealthy admirers like Joseph of Arimathea, but he insisted that having wealth carried responsibilities and especially towards the poor and disadvantaged – “the least of these my brethren”.

He warned against being so preoccupied with material possessions that other aspects of the human life experience are neglected.

And of course, corruption in business and the exploitation of vulnerable people made him angry, as was clear when he drove money changers from the temple.

In his book Winners Take All, published earlier this year, the American writer Anand Giridharadas argues that there is a need to take a hard look at our current economic model and especially the concentration of wealth in so few hands.

“Money” he suggested, “had transcended being currency to become our very culture, conquering our imaginations and infiltrating domains that had nothing to do with it.”

While respecting people like Bill Gates and other philanthropists who have given away much of their fortunes, Giridharadas questions how such individuals can amass vast fortunes while billions at the other extreme live in poverty. He is scathing about international conferences like the one held annually in Davos where the “great and the good” of the political, financial and commercial worlds gather, claiming to address the world’s economic problems and in particular wealth inequality. He describes this as “the elite charade of changing the world” while their real intent is to protect their own interests. He quotes Leo Tolstoy: “I sit on a man’s back choking him and making him carry me, and yet assure myself and others that I am sorry for him and wish to lighten his load by all means possible . . . except by getting off his back.”

It’s too easy to be on the wrong side of that equation and too many of us are.