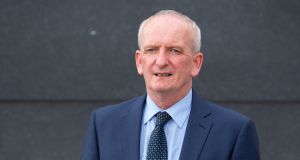 New Tusla chief executive Bernard Gloster: “I am very conscious that in the case of Tusla we intervene in the lives of people often in an unwelcome way.” Photograph: Tom Honan/The Irish Times

It is time Tusla and middle Ireland had a discussion about what can “reasonably be expected” from Tusla, the child and family agency’s new chief executive says.

There is a “deep mistrust in the Irish psyche” about any public service involved in providing care, says Bernard Gloster (53) and yet the public often expect Tusla to eliminate all risk for children.

A key objective of his tenure over the next five years will be to win the public’s realistic confidence in the beleaguered agency.

The Limerick-man’s entire 31-year career has been in health services, always up to now in the mid-west – first in childcare and family support as a social care worker, and since the early noughties in senior management.

Just over a week at the helm of the most controversy-prone arm of the health services, he says he knows “this is the kind of job where a bad day could end your career”.

He is Tusla’s third chief executive. Fred McBride, who stepped down in August 2018, had succeeded fellow-Scot Gordon Jeyes.

Jeyes’s task was to get the new agency – which emerged out of the HSE in 2014 – up and running while McBride embarked on a massive programme of modernisation. During his tenure, McBride also steered Tusla through storms over issues such as its handling of individual children’s cases and its role in an alleged smear campaign against Garda whistleblower Maurice McCabe.

“Public confidence in Tusla is highly questionable at the moment,” says Gloster. “Some of that is justifiable, but sometimes that is misinformed.” However, he says, the quality of the service provided needs to improve.

“I am very conscious that in the case of Tusla we intervene in the lives of people often in an unwelcome way. I want to ensure we are focused on improving the quality of service for them, regardless of not being welcome. Part of the solution will be bringing Tusla back to its core business – child protection, child welfare and family support.” He wants to achieve a consistency of approach across Tusla services and across the country – an absence of which is repeatedly highlighted by health watchdog Hiqa.

An addition problem, he believes, is that Tusla has become “too inward-looking” – reacting to crises while failing to communicate its positive work.

“I can understand why Tusla became inward-looking and defensive, when you have that sense of siege,” he says, citing critical Hiqa reports, various enquiries, and the Disclosure tribunal last year under Justice Peter Charleton on the Garda whistle-blowers which included an investigation into Tusla’s role .

The pace and scope of McBride’s programme of modernisation, Gloster feels, “is probably too much for the front-line organisation to absorb”.

“We have to slow down some of the work to give visibility to critical programmes [in child protection and family support] ... and move quickly to give social workers the capacity and capability to achieve the standardised approach which Hiqa is pointing to”.

Presenting its work assertively to the public will be critical to initiating a discussion “with middle ground Ireland” but is reasonable to expect of Tusla, he believes.

“I don’t believe we are all good but I equally don’t believe in the extreme anti-establishment view that we are all bad simply because we exist. I am interested in focusing on what is the nature of the debate we can have with middle-ground Ireland about what is reasonable ... expecting Tusla to eliminate all risk to children is not necessarily an unreasonable expectation but it is misinformed.”

Where there were foreseeable failings or shortcomings Tusla should be the body that tells the public “rather than have somebody else and then people become misinformed, emotional and angry” leading, he says, to Tusla being described as ‘not fit for purpose’ and calls for resignations.

Though McBride expressed frustration at what he saw as the lack of support from politicians in times of crisis, Gloster hopes Minister for Children Katherine Zappone will be “confident Tusla as an organisation is prepared to look at its own shortcomings and communicate those” thereby perhaps “reducing the need for constant oversight”.

He met her last week and “found her very encouraging”.

Asked about the ongoing “fact-finding process” around the circumstances leading to the Disclosures tribunal, he understood it was ongoing “and depending on the findings, that will or won’t determine if there is a basis for individual accountability. It is a very measured process,” he said.

“I would hope Maurice McCabe and his family understand the sincerity of the apology [from Tusla] and I hope as an organisation we live out the sincerity of that apology. If Tusla had been up-front and transparent about a mistake it had already identified, the likelihood of the need for a tribunal would have been slim to nil. That was a profound finding by Justice Charleton and one I take very seriously.”