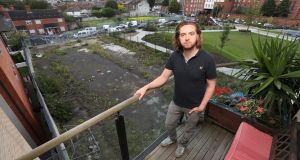 Patrick Fenton on the balcony of his apartment in the Southgate development on Cork Street in Dublin 8 overlooking the proposed site. Photograph: Nick Bradshaw

Residents of apartments in Dublin’s south inner city have threatened judicial review proceedings against Dublin City Council’s plans to build a seven-storey social housing block less than three metres from the windows of their homes.

The council has told the owners of apartments at the Southgate complex on Cork Street that it could consider buying their homes from them.

The council had intended to use emergency powers to build 55 social housing apartments surrounding Weaver Park on Cork Street, without seeking planning.

However, earlier this year it dropped this plan, along with plans for a similar scheme of 71 apartments in Chapelizod, and instead lodged planning applications for both schemes in July.

The Southgate residents are among almost 50 local residents and residents’ groups which have lodged objections to the council’s plans for Cork Street. None of the submissions objects to the use of the site for social housing, but they raise concerns about the height and density of the development and the inadequacy of the council’s planning application.

In their submission the Southgate residents note that while there were several references to the potential negative impact of their homes on the proposed block, there is very little focus on the effect of the new block on Southgate.

A “massing, overlooking and overshadowing” report on the council’s planning file shows “acutely negative impact on those homes closest to the proposed development and in particular those homes at the lower ground levels,” the residents said, with some homes “in a perpetual state of shadow”.

However, they said a more detailed “solar study” also commissioned by the council was not entered on the planning file. Patrick Fenton, who lives in a second-floor apartment said the study showed that in March his bedroom would receive less than one hour of sunlight during the day, and his living room would be in shadow at almost all times.

The residents said they would be willing to engage with the council in a “fresh design process” but if the council approved the existing plans they would “inevitably be subject to a judicial review”.

These legal proceedings “would likely prove to be successful” they said, given the council had acknowledged in meetings with residents the development “would have such a substantial negative impact on the residential amenity of adjoining homes that an offer was made to purchase these same homes by the city council.”

A spokeswoman for the council said it was “always seeking out opportunities to purchase apartments or houses” and a “suggestion that we might consider such a purchase [at Southgate] was made during the course of a community meeting”. The council did not envisage that “purported overshadowing” would be an issue in allocating tenants to Southgate if it did buy any of the apartments.

Under the process for developing council housing, the city councillors will determine next month if the development would get planning permission.

In a submission People Before Profit TD Bríd Smith and councillor Tina MacVeigh said while they welcomed the development of social housing at the site, the block beside Southgate “imposes too much on the residents”.