‘It’s no longer a shock’: the high suicide rate among Travellers 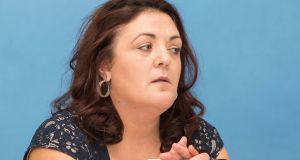 “Teenagers can’t go into pubs, and so forth. They are very isolated.” Bridgie Casey at the Minceirs Whiden meeting in Rosbrien, Limerick. Photograph: Liam Burke/Press 22

“We’ve a pain on our shoulders from carrying coffins.”

So said Bridgie Casey as she described the trauma of having 12 members of her extended family die by suicide. They include her brother John, whose four “orphan” children she now looks after.

The suicide rate in the Traveller community is six times higher than in the general population and seven times higher among young Traveller men*. A lack of support, coupled with “discrimination” and “racism” were the main reasons for the alarmingly high rate, Ms Casey said.

Speaking in Limerick at the opening of the first office of the national Traveller organisation Minceirs Whiden, Ms Casey (38) said suicide had worryingly “become the norm”.

Her brother John (36) “couldn’t cope” following the sudden death of his wife five years ago and he died by suicide 18 months later.

“It’s no longer a shock to me any more, which is absolutely scary, and that’s what’s sad. Mental health issues are severe in the Traveller community.”

She said, in total, she had lost 12 members of her extended family in the last five years. All were “under the age of 40”.

“The teenagers can’t go to discos because they’re refused at the door, all because they are members of the Travelling community. They can’t go into pubs, and so forth. They are very isolated.”

“This is the equivalent to life expectancy of Irish people in the 1940s,” the organisation said.

Travellers have the highest infant mortality rates and lowest educational achievements among any ethnic group in Ireland, and are trying to cope with an unemployment rate of 84 per cent, it added.

Poor living conditions, and growing rates of homelessness, are also affecting the community.

David Stanton, Minister of State at the Department of Justice and Equality, said all these issues “need to be addressed as a priority” in a new National Traveller and Roma Inclusion Strategy, which he is chairing.

“My department has identified feuding as a pivotal issue that will be put centre-stage in the implementation of this inclusion strategy, in that the anti-social behaviour of a small minority of your community and its negative ramifications impact directly on mental health, physical health, position of women and children, employment and on accommodation issues,” he said.

Speaking at the launch event in Limerick, Mr Stanton said Traveller education was another key priority. “Unfortunately, it is a fact that only 13 per cent of Traveller children complete second-level education compared to 92 per cent in the settled community. This is very damaging to the futures of these children.”

A subcommittee of the strategy steering group is to meet for the first time on Thursday.

If you have been affected by anything in this article, help and support is available by calling the Samaritans 24-hour helpline 116123 or emailing jo@samaritans.org

*This article was edited on October 3rd 2017