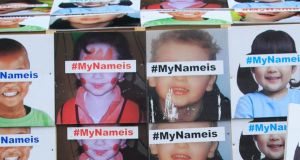 The #mynameis campaign is highlighting the issue of child homelessness. Photograph: Gareth Chaney/Collins

Child homelessness could yet cost the State millions of euro in compensation, the Government has been warned.

The Government’s special rapporteur for children, Dr Geoffrey Shannon, said spending money on solving the problem now was a much better outcome than paying millions of euro in compensation in the future when legal action is taken against the State.

“If we look at tribunals, several tribunals and commissions of inquiry that have been established, those are costing the taxpayer significant amounts of money.

“My view is the failure to address the practices of the present ends up costing the State millions of euros in the long haul. Would it not make sense to invest in actually tackling the problem now? Not only in terms of the better outcomes for the individuals involved, but also it saves the State significantly in the long run. We are sometimes very shortsighted. We feel we are saving money but we are storing trouble for the future,” he said.

Dr Shannon, speaking in Galway at the launch of the annual report of the charity Cope, said the increase in the number of homeless children was alarming. The Cope report said that last Friday night there were 132 children homeless in Galway.

Dr Shannon said spending money solving the problem is a much better option than having to pay compensation to these children when they grow up.

“There is no doubt that placing children in direct provision is a breach of their right to family life. It impacts at so many levels on children’s opportunities and it shouldn’t be beyond us to solve this problem.”

Dr Shannon, who is from Galway city, said homelessness among children was not an issue when he was growing up but that the scale of the problem is now becoming more visible.

“I still regularly travel back to Galway and what I have noticed over the last number of years is the first time I have seen young people living in doorsteps – when I grew up that just didn’t happen.

“Times weren’t as good, many would have said, but at the same time what we didn’t have was a situation where significant numbers of adults and children ended up homeless. I am concerned about this at a local level, the fact that there has been such a significant increase and it’s not for the want of spending. Government have invested a lot of money into this.

“But we need to realise the dynamics and complexities of this problem. In this report what we see are very real people. Behind statistics are real people and real people are affected every day by the splurge of homelessness. It must be a top Government priority insofar as children are concerned.”